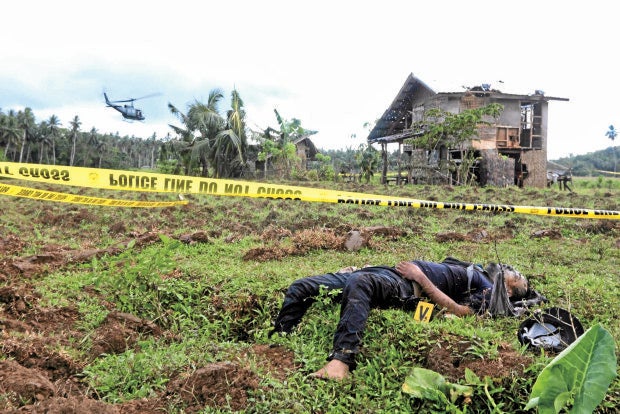 ‘PALIT-ULO’ Muammar Askali, aka Abu Rami, who was involved in the kidnapping and beheading of foreigners by the Abu Sayyaf, was among those killed in Inabanga, Bohol. —TONEE DESPOJO/CEBU DAILY NEWS

A leader of the Abu Sayyaf group who was directly involved in the kidnapping and beheading of Canadian and German nationals was among the bandits killed by security forces in a clash in Bohol province on Tuesday, the military chief said on Wednesday.

Muammar Askali, who used the nom de guerre Abu Rami, was one of six Abu Sayyaf bandits killed by soldiers and policemen in a daylong gun battle in Napo village, Inabanga town, Bohol, on Tuesday, according to Gen. Eduardo Año, chief of staff of the Armed Forces of the Philippines.

Three soldiers and a policeman were killed in the fighting.

The military has recovered the body of Rami, a former spokesperson for the Abu Sayyaf, a brutal bandit group notorious for bombing attacks, extortion, kidnappings for ransom and beheadings of foreign hostages in Mindanao.

Año said troops took the picture of Rami after his death and that captured Abu Sayyaf bandits identified Rami.

The killing of Rami provided confirmation that the intruders in Inabanga were Abu Sayyaf bandits and indicated that the brutal group was now operating far from its lairs in Basilan and Sulu provinces.

Presidential spokesperson Ernesto Abella said the military and the police were on top of the situation.

“The public should have no cause for alarm, as the situation is contained and our security forces are in control. The government is exerting all efforts to maintain peace and order,” Abella said.

Rami’s group beheaded Canadian John Ridsdel on April 25, 2016, and Canadian Robert Hall on June 13, 2016, and elderly German national Jürgen Gustav Kantner on Feb. 26 after the bandits failed to get millions of dollars in ransom.

All the killings took place in the southern province of Sulu, stronghold of the Abu Sayyaf, some of whose leaders have pledged allegiance to the Islamic State (IS) group of jihadists in Iraq and Syria.

Año said Rami had been seen as one of future leaders of an Abu Sayyaf group that could be affiliated with IS.

“He was trying to make a name for himself, trying to arrange a career that could replace (Abu Sayyaf leader Radullan) Sahiron,” Año said.

The military in Sulu confirmed that Rami was one of the Abu Sayyaf bandits killed by government forces in Bohol.

Brig. Gen. Cirilito Sobejana, commander of the military’s Joint Task Group Sulu, told the Inquirer on Wednesday that Rami and his group were monitored leaving Sulu on Thursday last week.

“He and his followers left Sulu for a safer place, but it appears that there’s no safe place for the Abu Sayyaf anymore,” Sobejana said.

An Inquirer source said military intelligence had noted the absence of Rami and Alhabshi Misaya, another Abu Sayyaf leader, from Sulu following clashes between government forces and the bandits in recent weeks.

Intelligence reports indicated that Rami’s group moved to Bohol to link up with Alden Yusup, an Abu Sayyaf leader operating on the Central Visayan island, the source said.

“They went to Bohol using two fishing pump boats and pretended to be fishermen,” the source said.

Rami’s group, the source said, planned to kidnap foreign tourists in Loboc, a town in Bohol popular for lunch cruises on a river and sightings of the tarsier, the world’s smallest primate, and in Panglao, a dive site off the main Bohol island popular among Western divers.

Año said Rami’s group planned to strike during the Lenten season, during which tourists flocked to Bohol.

Chief Supt. Noli Taliño, Central Visayas police director, said authorities were not sure how many men were in Rami’s group when it entered Napo.

According to accounts of villagers, however, there were at least 10 gunmen who came in three pump boats.

The group entered Inabanga on Monday night, sailing up the Inabanga River to Napo, where residents, alarmed at the unusual make of the boats, alerted the authorities.

Government forces attacked the gunmen early Tuesday. The gunmen took cover in three houses as they traded gunfire with the soldiers and policemen.

The security forces seized control of two of the houses, driving the gunmen to the third house or to the bushes, where Philippine Air Force gunships hit them with bombs in the afternoon.

Six of the gunmen, including Rami, were killed in the fighting and airstrikes.

Military reinforcements arrived on Wednesday to finish the operation, going after the fleeing remnants of Rami’s group.

“They are on the run. They have left their belongings [behind],” Año said.

“We already have leads on the direction of their escape. They cannot fight as a potent force like before. They are all running for their lives,” he said.

Año said the situation in Bohol, far from the Abu Sayyaf’s island strongholds in the south, was now “back to normal,” even as the military mourned the loss of three soldiers.

Año said another soldier was wounded in the fighting, but was out of danger.

The identity of the slain police officer was not immediately available.

The bandits, who identified Rami after his death, surrendered to Joint Task Force Tawi-Tawi, under the command of Brig. Gen. Custodio Parcon, a Medal of Valor awardee. —WITH REPORTS FROM LEILA B. SALAVERRIA, LEO UDTOHAN, NESTLE SEMILLA, ADOR MAYOL, THE WIRES