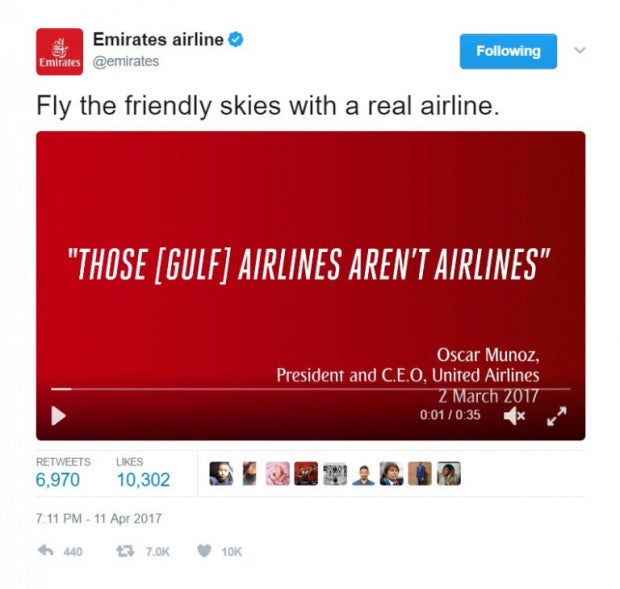 It’s getting real. Stocks have plunged at United Airlines, frequent flier members are cutting up their loyalty cards, a competing airline has thrown shade at United in a bold new ad, and the incident has traveled around the world and reached the highest levels of governments.

On April 11, Emirates posted a snarky and rather audacious video on Twitter, getting back at United CEO Oscar Munoz who is cited as having said “Those [Gulf] airlines aren’t airlines,” back in March.

In the post, which smells strongly of vindication, Emirates responds: “Well, Mr. Munoz, according to TripAdvisor, the world’s largest travel site, not only are we a real airline, we are the best airline.”

The final tagline: “Fly the friendly skies with a real airline.”

The incident, which started going viral late Sunday and has since exploded on the internet, involves video footage of a passenger being forcibly and brutally removed from an overbooked domestic United Airlines flight from Chicago O’Hare airport.

Aviation security officers can be seen wrenching the man out of his window seat with such force that he hits his head violently against the armrest across the aisle, to the horror of fellow passengers.

Munoz’s tepid statements have been met with ridicule and outrage from the public. On Tuesday, he issued his latest statement, pledging to review United’s procedures for incentivizing volunteers in overbooked situations and how they work with airport authorities, in a report that will be communicated April 30.

“The truly horrific event that occurred on this flight has elicited many responses from all of us: outrage, anger, disappointment. I share all of those sentiments, and one above all: my deepest apologies for what happened,” the statement starts.

“I want you to know that we take full responsibility and we will work to make it right. It’s never too late to do the right thing.”

Meanwhile, the fallout from the incident has caused United Airlines stocks to take a tumble and has reached the highest levels of government.

During a press briefing in Washington on April 11, White House press secretary Sean Spicer addressed the issue saying he’s sure President Donald Trump has seen the videos, but that the incident doesn’t warrant a federal response.

“I don’t think anyone looks at the video and isn’t a little disturbed that another human being is treated that way,” he said.

The incident also elicited a response from Canada’s transport minister Marc Garneau, who vowed never to let such an incident occur in Canada. He added that a passenger bill of rights, to come into force in 2018, will address overbooking, in addition to setting rules for flight changes, airline fees and lost luggage.

Along with skewering the airline on social media with creative memes and tweaked slogans, consumers have been expressing their outrage by cutting up their loyalty and United credit cards, and posting them on Twitter.

Meanwhile, reporters at the Courrier-Journal identified the passenger as Dr. David Dao, in a piece that has received backlash for digging into the man’s murky past and adding another layer of controversy to the story.

According to the Courrier-Journal, Dao was convicted of drug-related offences in 2005 and had to surrender his medical license.

“Such a shame that this reporter is so quick to smear this man’s name. What does his ‘troubled past’ have to do with the United Airline debacle? His past does not justify UA beating the piss out of him,” reads one of the most liked comments on the story.

Through his lawyers, Dao thanked the public for their support and said he will not be making any more statements until he is released from hospital. Dao has hired lawyers specializing in personal injury and corporate governance and is expected to sue the airline. JB