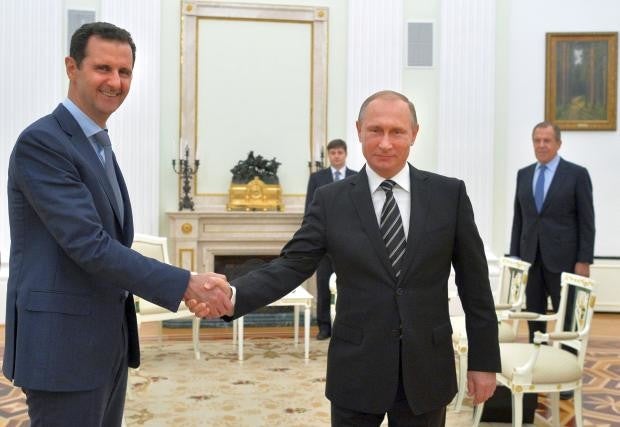 In this photo, taken Oct. 20, 2015, Russian President Vladimir Putin (center) shakes hand with Syrian President Bashar Assad as Russian Foreign Minister Sergey Lavrov (right) looks on in the Kremlin in Moscow, Russia. US Secretary of State Rex Tillerson’s statement Tuesday, April 11, 2017, that the reign of President Bashar Assad’s family “is coming to an end” suggests Washington is taking a much more aggressive approach about the Syrian leader. Taking him out of the equation without a clear transition plan would be a major gamble. (Kremlin pool photo by ALEXEI DRUZHININ / Sputnik via AP)

MOSCOW — Early expectations of an easy rapport between the Trump administration and Russia are crashing into reality as US Secretary of State Rex Tillerson has a fraught meeting in Moscow beset by escalating allegations over Syria.

The first Trump Cabinet official to visit Russia, Tillerson is on a thus-far-futile mission to persuade Russian President Vladimir Putin to abandon support for Syrian President Bashar Assad. The fallout from Assad’s chemical attack last week and the U.S. airstrikes that followed have plunged the United States and Russia into tensions rarely seen since the Cold War.

Tillerson planned to meet Wednesday with Foreign Minister Sergey Lavrov, a seasoned diplomat whose strident defense of Putin’s agenda has frustrated several previous US secretaries of state. It was unclear whether Putin, who typically doesn’t announce high-level meetings in advance, would grant Tillerson an audience while he is in Russia.

Adding further fuel to rising tensions: the White House’s move to circulate declassified U.S. intelligence accusing Moscow of aiding Assad’s government in covering up a gruesome, nerve gas attack that killed more than 80 people. The U.S. also accused Russia of mounting a disinformation campaign aimed at exonerating Assad from blame for the attack.

Russia has insisted it was Syrian rebels – Assad’s forces – that were responsible for the chemical weapons. Intelligence services from several Western countries dispute that claim. The health minister in Turkey, which treated many of the attack’s victims and conducted autopsies on others, said Tuesday that test results conducted on victims confirmed sarin gas was used.

Ahead of Tillerson’s meeting, Russian Deputy Foreign Minister Sergei Ryabkov said Moscow was still struggling to understand the Trump administration’s Syria policy, including its plans for “stability zones” after the Islamic State group is vanquished.

“Overall, the US administration’s stance on Syria is still a mystery to us,” Ryabkov told Russian news agencies.

There were no guarantees that Tillerson’s arguments in Moscow would prove any more successful than the Obama administration’s failed effort to peel Russia away from its Syrian ally.

Tillerson’s mission, coming days after 59 US Tomahawk missiles struck a Syrian air base, also carries serious risks: If Russia brushes off the warnings, Trump could be forced into another show of force in Syria or see his credibility wane.

“I hope that what the Russian government concludes is that they have aligned themselves with an unreliable partner in Bashar al-Assad,” Tillerson said Tuesday before flying to the Russian capital.

“The reign of the Assad family is coming to an end,” he confidently predicted.

But Tillerson’s claim is one that President Barack Obama, too, argued for several years, only to see Assad outlast his own term in office. And the Trump administration’s nascent Syria policy seems to be increasingly centering on the same tactic Obama unsuccessfully employed: persuading Russia, Assad’s staunchest ally, to abandon him.

The parallels haven’t gone unnoticed by Putin. Calling for a UN investigation, Putin held to his claim that it was actually Assad opponents who introduced chemical weapons into Syria’s harrowing civil war.

“We have seen it all already,” Putin said. Jabbing at US credibility, the Russian leader reminded reporters about unfounded U.S. claims of Iraqi weapons of mass destruction, used to justify America’s 2003 invasion.

The animosity is especially striking given widespread speculation that Trump, who lavishly praised Putin during his campaign, would pursue rapprochement with Moscow.

Even on Syria, the positions appeared to be hardening. Only a week ago, top Trump officials had spoken of de-prioritizing past US efforts to remove Assad from office and accepting the “reality” that 18 months of Russian military intervention had secured him in power.

Since last Thursday’s cruise missile strike, Tillerson and other US officials appear to have reverted to the past administration’s rhetoric of insisting that Assad is on the way out, without outlining any strategy for making that happen.

The Trump administration’s change of heart, apparently spurred in part by Trump’s emotional response to the images of chemical weapon victims, also is serving another purpose: defanging the perception of coziness between Trump and Moscow. As the FBI and multiple congressional committees investigate potential collusion between Russia and Trump’s campaign, Trump can point to his hard-line stance on Assad as fresh evidence that he’s willing to stand up to Putin.