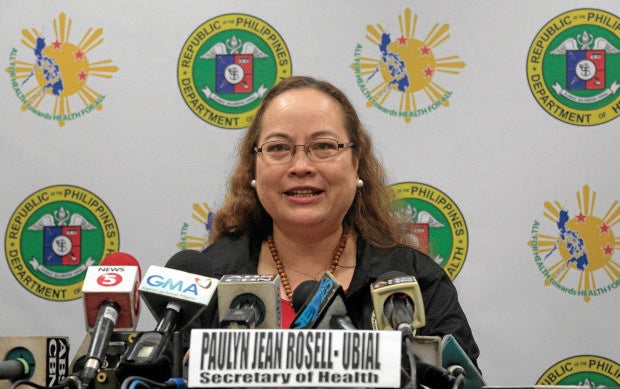 Despite contradicting statements from the two camps amid an apparent power struggle, Department of Health (DOH) Secretary Paulyn Jean Rosell-Ubial on Wednesday maintained that the Philippine Health Insurance Corporation (PhilHealth) already has a new interim president and CEO in the person of Dr. Celestina dela Serna.

But Ubial said resigned PhilHealth chief Hildegardes Dineros, who said he was “forced” to resign after a month in office, would continue to serve as Board member. The DOH chief, who also sits as concurrent PhilHealth chair, affirmed the selection of Dela Serna in a unanimous vote of the current Philhealth Board of Directors last Monday.

“Secretary Ubial wishes to make it clear to all concerned that Dr. Dineros continues to serve as a member of the PhilHealth Board, being the representative of the Informal Economy Sector, on the merit of his earlier appointment by President Duterte. As such, the expertise he lends to the Corporation in this capacity shall continue to be valued by the members of the Board,” the DOH said in a statement.

“Dr. Dineros’ future inputs shall be welcomed by the Board, and any decisions arrived at will be made without partiality nor prejudice to his behavior, the DOH Secretary asserted. Secretary Ubial prays that the Holy Week will provide discernment to all concerned so that Philhealth can now focus on its tasks,” it added.

Ubial earlier said that Dineros resigned from his post on Monday and was among the members of the Board who voted for Dela Serna as his replacement in an emergency meeting. But Dineros on Tuesday said he was “involuntarily ousted” and considered himself on “holdover status awaiting further orders and instructions from the Office of the President.”

“Since I accepted and actually discharged my duties as nominated and duly elected interim PCEO, then that was a completed and permanent appointment, which can no longer be withdrawn or revoked as the same is subject only to the confirmation or rejection by President Duterte himself,” Dineros said.

The DOH said Ubial “expressed her sympathy and understanding for Dineros and his statements that followed his replacement.”

During his stint as interim president and CEO, Dineros ordered the reassignment and reappointment of over 40 PhilHealth officers and personnel “in pursuit of enhanced and expedient delivery of services.” But in a memo, Ubial questioned his authority to make appointments or reshuffle PhilHealth staff.

Citing a source who declined to be named for lack of authority to speak to the media, the Inquirer earlier reported that PhilHealth employees were supposed to wear black armbands last Monday as a sign of protest against Ubial, to which the Health secretary reacted: “If there’s anyone saying false things and disrupting the work at PhilHealth, it’s Dineros! We did not oust him, he resigned.” JE