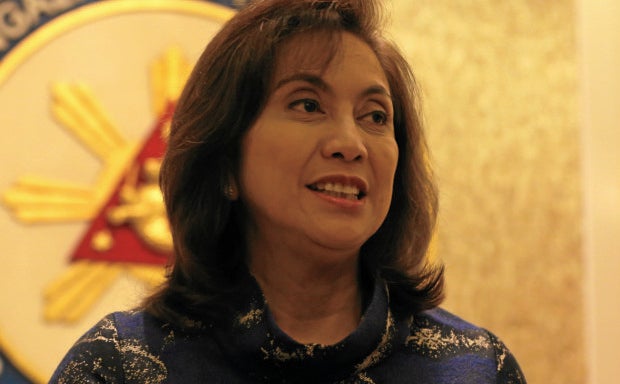 The camp of Vice President Leni Robredo on Tuesday acknowledged the “continuing challenge” for her to do better, as her public satisfaction rating dropped 11 percentage points in the latest Social Weather Stations (SWS) survey.

The first quarter 2017 SWS survey, conducted from March 25 to 28 using face-to-face interviews with 1,200 adults, found 53 percent of the respondents were satisfied with the performance of Robredo, 27 percent were dissatisfied while 19 percent were undecided, for a net rating (satisfied minus dissatisfied) of “moderate” +26.

This is down from her “good” +37 (58 percent satisfied minus 20 percent dissatisfied, correctly rounded) recorded at the end of last year and from “good” +49 in September 2016, when she was first rated as Vice President.

Reach out to more people

Georgina Hernandez, a spokesperson for Robredo, said the results of the latest SWS survey were a reminder that the Vice President needed to reach out to more Filipinos.

“These results are a steady reminder that there are more families and communities to reach out to,” Hernandez said. “We take every survey as a continuing challenge to do better and make a bigger difference in the lives of the marginalized.”

Robredo remains grateful for the trust given to her by the people, Hernandez said.

“We are grateful for the continued trust of our fellow Filipinos in the recent SWS satisfaction ratings. The support of the majority is an encouragement to Vice President Leni Robredo, who is working with communities and partners to address poverty around the country,” she said.

The survey was conducted days after President Duterte’s allies attacked Robredo for sending a video message to the United Nations calling attention to extrajudicial killings in the government’s war on drugs.

Released on Monday, the survey had a margin of error of plus or minus 3 percentage points for national percentages and was first reported in BusinessWorld.

The changes in the net satisfaction ratings of Senate President Aquilino Pimentel III, House Speaker Pantaleon Alvarez and Chief Justice Maria Lourdes Sereno were all within the survey’s margin of error.