Going to Japan to see cherry blossoms? Try Palawan and its cherry trees 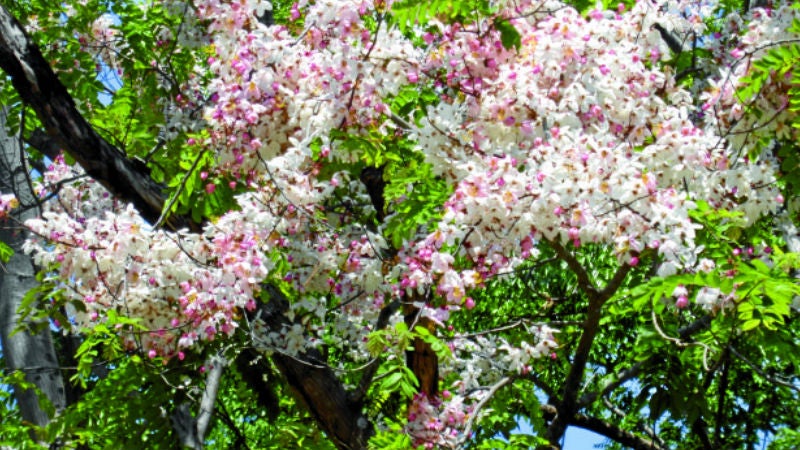 LOCAL PRIDE Residents of Puerto Princesa City are proud of their “balayong” or Palawan cherry trees, which are blooming this summer and are attracting tourists to the Palawan capital. —REDEMPTO ANDA

PUERTO PRINCESA CITY—You need not travel to Japan to enjoy the sight of cherry blossoms during the Sakura Festival. Trees that flower like cherry blossoms are found in Palawan, right in the heart of the provincial capital.

With summer peaking, the local cherry trees, known as “balayong” (Cassia nodosa) which are found on main highways, public parks and campuses, are in full bloom, capturing the attention of tourists and locals alike.

The city government has taken notice and tapped the balayong to boost Puerto Princesa’s image branding for tourism.

Early this month, it held its 13th annual Mardi Gras-type Balayong Festival. While the colorful street partying has yet to attract mainstream tourists’ attention compared with Palawan’s popular nature destinations, the event has popularized the tree.

In residential nooks of the city center, Palawan cherry trees are planted at random—along sidewalks and in backyards.

When these trees flower from March to June, when the rainy season starts, they provide a dominantly pink hue to the neighborhood.

The best flowers are found on the main campus of Palawan State University in Barangay Tiniguiban and in front of an old hotel on the national highway in Barangay San Miguel.

A row of cherry trees planted along Rizal Avenue during past festivals are now fully grown, though some show signs that they are dying. The road leads to the airport.

Several properly trimmed trees are in the provincial capitol park.

Former Councilor Mike Cuaderno lamented that the Palawan cherry could not be found in other places in the city.

“If I were a tourist, I would be searching for [an area where I can see the trees in] abundance. We need to have a place where people will appreciate [their] beauty, not [see them dispersed]. It’s a pity that the ones along Rizal Avenue seem to be dying,” Cuaderno said.

Little, if any, is being done by local officials to propagate the tree species so that it can be offered as a tourist attraction.

Former Mayor Lucilo Bayron had announced that his administration was considering the creation of a massive Balayong Park in a government-owned property. The plan has yet to take off.

There is still a dearth of scientific information on the origins of the Palawan cherry.

Renowned botanist Leonard Co, who had done extensive field work in Palawan before he was killed in 2010, had claimed that the tree was not endemic to the province.

According to Co, the plant is a legume belonging to the family of the common acacia and is endemic to Borneo, an island shared by Indonesia, Malaysia and Brunei.