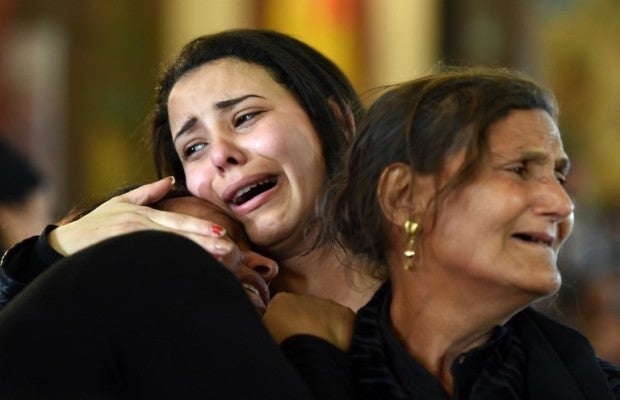 Women mourn for the victims of the blast at the Coptic Christian Saint Mark’s church in Alexandria the previous day during a funeral procession at the Monastery of Marmina in the city of Borg El-Arab, east of Alexandria, on April 10, 2017.
Egypt prepared to impose a state of emergency after jihadist bombings killed dozens at two churches in the deadliest attacks in recent memory on the country’s Coptic Christian minority. AFP

ALEXANDRIA, EGYPT – Over screams of despair, Coptic Christian mourners bade farewell Monday to their “martyrs” killed in a jihadist bombing at Saint Mark’s church in Egypt’s coastal city of Alexandria.

At funeral services, Copts insisted they will “pray for the rest of our lives” and keep going to church, despite Sunday’s twin bomb attacks on churches in Alexandria and Tanta, north of Cairo, that cost 45 lives.

After three deadly attacks in four months, following a December suicide bombing which killed 29 worshipers in a Cairo church, mourners chanted for the dismissal of Interior Minister Magdy Abdel Ghaffar.

At Mar Mina monastery, 50 kilometers (30 miles) from Alexandria, wooden coffins holding some of the victims’ bodies were placed near the altar as applause echoed in a packed church to pay tribute to the victims.

Women in black screamed and wailed in pain while others silently wept.

After prayers, scouts carried the coffins, to the sound of drum beats, to the cemetery, also inside the monastery. 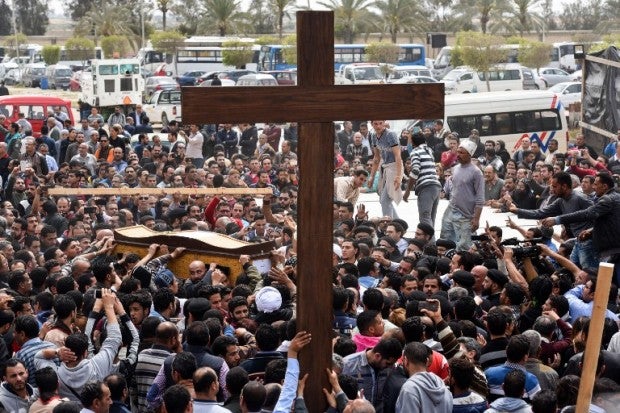 Mourners carry a large cross and the coffin of one of the victims of the blast at the Coptic Christian Saint Mark’s church in Alexandria the previous day during a funeral procession at the Monastery of Marmina in the city of Borg El-Arab, east of Alexandria on April 10, 2017. AFP

“They are holding a procession for the martyrs, who will be met with another procession in heaven… How beautiful is this?” said a woman mourner, her voice choking with sadness.

The first of the suicide bombings claimed by the Islamic State jihadist group went off inside Mar Girgis church during Palm Sunday mass in Tanta, killing 28 people.

The second struck outside Saint Mark’s church, killing 17 people after the suicide bomber was prevented from entering the building.

The mourners took their anger out on security services and the interior minister, vowing their faith would not waver in the predominantly Muslim country where Copts make up around 10 percent of the 92-million population.

“There was a serious security lapse in Tanta, but not in Alexandria,” said Mohamed Sobhy, 33, an organizer of the funerals for those killed at Saint Mark’s.

But Sabah, a 35-year-old woman who lost her cousin in the Alexandria blast, disagreed. “Of course there’s no security. If there were, this wouldn’t have happened,” she said.

Pray for ‘rest of our lives’

Chanting “I am a Christian till judgment day,” the mourners pledged not to abandon their faith.

Mina, a 52-year old government employee, said: “If the aim of these attacks is for us to stop going to church… this will not happen. We will pray for the rest of our lives.”

Another mourner, Sabah, said: “We’ve got used to this. On every occasion, on every feast, there is an explosion.”

Although Copts traditionally do not hold funerals during Holy Week leading up to Easter Day, prayers were held on Monday to ease the pain of the Coptic community.

ISIS has been waging a deadly insurgency in Egypt’s Sinai Peninsula and has claimed scores of attacks on security forces there.

“Targeting police does not produce much reaction and they want to create instability, so the Copts are the weakest link,” said Sharaf, a 52-year-old government employee. CBB