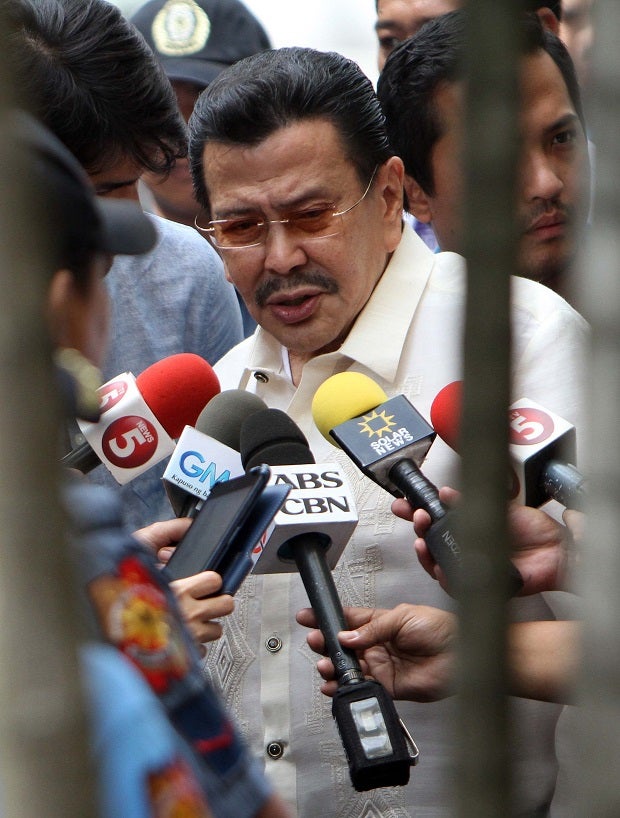 Former president and now Manila Mayor Joseph Estrada talks to reporters in Manila in this July 8, 2014 file photo. The alleged dummy of Estrada, Jaime Dichaves, has questioned the looming warrant of arrest to be issued against him for plunder. Estrada, it could be recalled, was convicted of plunder in September 2007 but was pardoned by then president Gloria Macapagal Arroyo six weeks later. Dichaves was never tried for plunder because he left the country then. (PHOTO BY LYN RILLON / INQUIRER)

MANILA — With former President Joseph Estrada’s lawyer Estelito Mendoza in tow, Jaime Dichaves, the alleged dummy of Estrada, has begun making moves ahead of the expected issuance of an arrest warrant in his recently resumed plunder case.

Before the Sandiganbayan Seventh Division could order his arrest for the non-bailable offense, businessman Jaime Dichaves asked the court to require prosecutors first to specify which of the “voluminous” evidence served as basis for a finding of probable cause against him.

In his four-page “urgent omnibus motion in regard to the issuance [sic] of a warrant of arrest,” Dichaves cited the fact that prosecutors have submitted more than 60 volumes of unlisted documents running about 30,000 pages.

“He has the right to know on what basis the prosecution seeks to have the court issue a warrant of arrest against him and on the basis of which the court will make its determination of probable cause,” the motion read.

Specifically, Dichaves wanted the prosecution to identify which acts he allegedly committed “pertaining to each and every element of the offense of plunder,” as well as the evidence backing up each allegation. He also sought to be furnished a copy of the evidence against him.

Dichaves also asked the court to give him first the chance to submit a comment on whether a warrant of arrest should be issued based on the available evidence.

The businessman claims to be the true owner of the Jose Velarde bank account at the Equitable-PCI Bank. Prosecutors alleged Estrada conspired with Dichaves to use the account to stash P3.23 billion in ill-gotten wealth, including commissions from the government’s purchase of shares from leisure firm Belle Corp.

Dichaves, however, could not be tried alongside Estrada in Criminal Case No. 26558, as he slipped out of the country by the time the Sandiganbayan first ordered his arrest on Jan. 29, 2002.

He only returned only in Nov. 19, 2010, three years after the former President was convicted of plunder in September 2007 but pardoned only six weeks later. (Estrada placed second in the 2010 presidential election and became incumbent Manila mayor  in June 2013.)

Dichaves’ trial did not resume right away, after the Sandiganbayan in July 1, 2011 granted his motion for reinvestigation. On Sept. 18, 2011, it recalled the standing arrest warrant.

The Office of the Ombudsman began preliminary investigation in December 2011 and affirmed the finding of probable cause for his plunder indictment three months later.

This prompted Dichaves to question the Ombudsman resolution at the Supreme Court, which issued a temporary restraining order against the Sandiganbayan proceedings on July 17, 2013.

Last Dec. 7, the high court affirmed the Ombudsman indictment and said it was not attended by grave abuse of discretion. This paves the way for the resumption of the Sandiganbayan proceedings. The Third Division under Presiding Justice Amparo Cabotaje-Tang was originally supposed to handle the case, but it was reraffled to the Seventh Division on March 31.

At the Sandiganbayan, Dichaves will be represented by Mendoza, the former Solicitor-General of dictator Ferdinand Marcos and the renowned defense lawyer who argued for the restoration of the freedom of former President Gloria Macapagal-Arroyo and Senator Juan Ponce Enrile.

Mendoza was Estrada’s lead counsel during his aborted impeachment trial in 2001 and shepherded his defense during a plunder trial that ended with his 2007 conviction. Pacifico Agabin joins him as Dichaves’ legal counsel.  SFM/rga