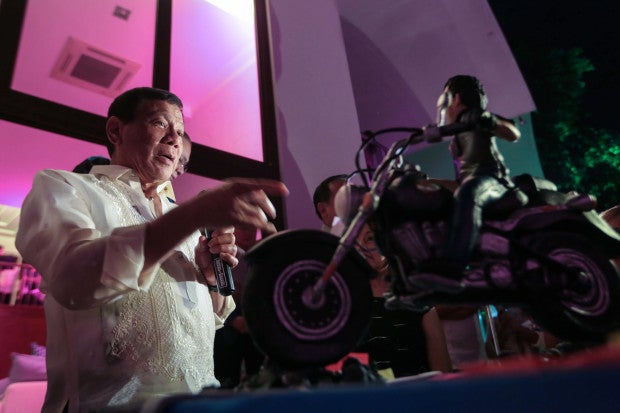 Mr. Duterte accused the Philippine Daily Inquirer of owing taxes to the government.

He also accused ABS-CBN television network of not returning the money he had paid for airtime that was never given to him during last year’s presidential campaign.

In a talk with reporters in Puerto Princesa City, Palawan province, Mr. Duterte said the Inquirer owned Dunkin Donuts, which he claimed had tax liabilities that were “fixed” by former Bureau of Internal Revenue Commissioner Kim Henares.

The Inquirer does not own Dunkin Donuts.

He said the tax deficiencies were not paid, or only a portion had been settled.

As for ABS-CBN, Mr. Duterte said he paid the network for airtime during the campaign, using money he received from donors when his ratings went up.

“You know that son of a bitch ABS-CBN, they accepted my money, they never showed my [advertisement]. Up to now, there was no offer to reimburse or to return the money. Those son of a bitch oligarchs are that shameless,” he said.

Mr. Duterte said ABS-CBN showed an advertisement, produced by his critic Sen. Antonio Trillanes IV, that used children to criticize him during the campaign.

He also noted that the Inquirer and ABS-CBN had reported on Trillanes’ allegations that he had more than P200 million in an undisclosed bank account, which he denied.

‘I don’t have that money’

Mr. Duterte challenged the two news organizations to look into his bank accounts.

“Now that I’m President,” he said, “I’m giving everybody the authority, including Inquirer and ABS,” to look into his bank records.

“I do not have that money. And if anybody can point to it, I will step down tomorrow as President of this republic,” he added.