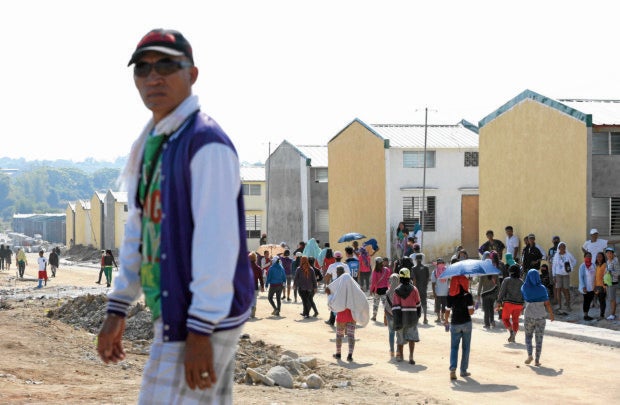 BUSTOS, Bulacan—Leaders of the urban poor group Kalipunan ng Damayang Mahihirap (Kadamay) on Wednesday asked President Duterte if they could take over other housing projects meant for soldiers, policemen and firemen in Bulacan province.

Kadamay chair Gloria Arellano said her group wanted to occupy about 3,000 houses in Bocaue town and 877 houses in Bustos town that remained idle.

Arellano said about 20,000 people took over more than 5,000 houses in six low-cost housing projects in Pandi town and the City of San Jose del Monte on March 8 because their housing applications were ignored by the National Housing Authority (NHA).

The houses that Kadamay members occupied were in Villa Louise in Barangay Cacarong Bata in Pandi.

On Tuesday, Mr. Duterte urged soldiers and policemen to give up their claims to houses forcibly occupied by Kadamay members, saying he would build them better housing projects by December.

“We assume his [announcement] applies to all the vacant houses benefiting the soldiers and policemen, not only in Bulacan but throughout the country,” Arellano said.

Meet with the President

“There has to be clarity,” she said, adding that Kadamay was seeking a meeting with the President to get from him written directives that they could now own the houses they were occupying.

In Bulacan, more than 12,000 Kadamay members have no houses of their own and are considered the poorest in their communities, Arellano said.

“Since the President referred to all housing projects for soldiers and policemen, we assume [those housing sites] are now ours … to benefit the homeless,” she said.

But that was not how some policemen interpreted Mr. Duterte’s announcement during the 120th anniversary celebration of the Philippine Army on Tuesday.

Bernabe said this was the reason the police continued to guard the Bustos and Bocaue housing projects.

Some policemen guarding Bustos Heights, which was targeted by Kadamay three weeks ago, said they had pending applications for the units there.

Caretakers at Bustos Heights said many units were not yet fully built and were still to be turned over to the NHA.