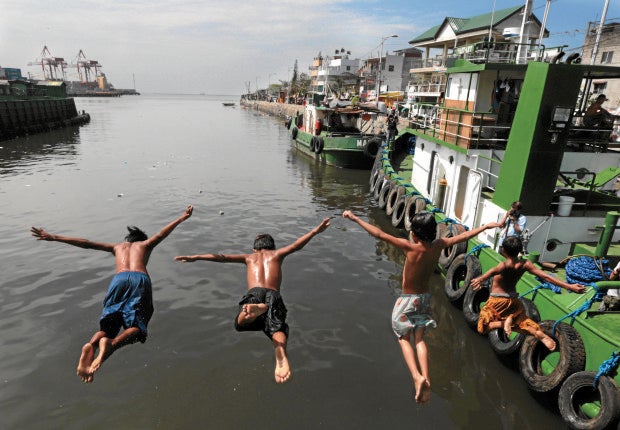 Young boys cool their heels by jumping at the waters of Manila Bay in Baseco, Tondo in Manila on Wednesday, March 29, 2017. INQUIRER PHOTO / GRIG C. MONTEGRANDE

Is there “summer” in the Philippines? Or should this time of year in the country be called “dry season”?

It is said that the Philippines has only two seasons — wet and dry.

On Wednesday, the weather bureau, using official terminology, announced the onset of the dry season, after the northeasterlies had blown away.

“Summer” is the universal term for “dry season” and if it is now summer, then it’s travel time for Filipinos.

Many are expected to drive up to Baguio City, the “summer capital”—have you heard anyone saying “dry season capital”?—of the Philippines.

School will soon be out and students will be going on “summer vacation,” not “dry season vacation.”

In a statement, Vicente Malano, head of the Philippine Atmospheric Geophysical and Astronomical Services Administration (Pagasa), said on Wednesday that the weather would “gradually become warmer and drier in the coming weeks,” with the establishment of the North Pacific High Pressure area over the weekend and the continued effects of the easterlies—winds coming from the Pacific Ocean—being felt in the country.

Earlier, Pagasa said the easterlies were one of the factors that had been raising temperatures in the country since March, with heat indices—

temperatures felt by the human body—reaching “danger levels,” or surpassing 40 degrees Celsius in some cities.

The heat index factors in air temperature and relative humidity.

Air temperature did not breach 40 degrees Celsius in March, but is expected to by May, Pagasa said.

Speaking at the 90th Climate Outlook Forum at the Pagasa central office in Quezon City on Wednesday, Analiza Solis of the bureau’s climatological and agrometeorological division, said extreme ranges of air temperature were forecast to reach 39 degrees Celsius in April, 40 degrees Celsius in May, and as low as 15 degrees Celsius in mountainous areas.

“In general, it will be slightly cooler than average during the forecast period in portions of the Visayas area, and slightly warmer in portions of Luzon and Mindanao, Solis said.

It is still too early to predict whether El Niño—characterized by dry and hot weather—will develop later in the year, with prediction models across the globe still exhibiting “high uncertainty in forecasting,” she said.

Despite the onset of summer, Malano said isolated rainshowers and thunderstorms were still expected in the eastern sections of the Philippines due to a “localized convection,” and in Mindanao due to “the northward migration of the intertropical convergence zone (ICTZ).”

The ICTZ is a narrow zone near the equator where northern and southern air masses converge, typically producing low atmospheric pressure.

Only one tropical cyclone is expected to hit the Philippines in April, or none at all, according to Pagasa.

Solis said eight to 12 tropical cyclones were expected to develop in or enter the Philippine area of responsibility from April to September.

Also on Wednesday, the Philippine National Police advised vacationers not to give up-to-the-minute updates of their travel plans on social media, as this could give robbers ideas.

Supt. Elmer Cereno, a member of the PNP-Police Community Relations Group, said it would be easy for robbers to pick up social media posts and they could strike at the empty homes of entire families traveling together during the holidays.

Cereno said vacationers should also avoid putting a sign on their houses that nobody’s home.

Instead of such a sign, Cereno said vacationers should ask their neighbors to look after their houses and inform them when they would return.

The PNP is deploying up to 70,000 officers across the country to ensure the safety of vacationers.

Cereno said the PNP would set up police assistance desks in bus stations, ferry piers and airports for vacationers who would need help.

He advised travelers to buy tickets in advance instead of at bus or ferry terminals on the day of their trip to avoid being hit by pickpockets.

Cereno also said travelers should carry identity papers and if they saw people acting suspiciously or for suspicious luggage or boxes, they should quietly report these to the police.