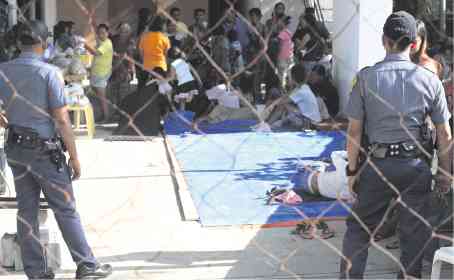 Quezon City policemen at Camp Karingal detain a group of informal settlers evicted from a private lot on Monday and charged with grave coercion and trespassing. —EDWIN BACASMAS

A Quezon City prosecutor has found probable cause to indict them for grave coercion and trespassing, following their eviction from the property at 14 Apollo St., Barangay Tandang Sora. It was the same lot from which they were forcibly removed by court order in June 2016.

Kadamay was also the organizer of the estimated 20,000 people who last month took over unoccupied sections of a housing project for policemen and soldiers in Pandi, Bulacan.

In a speech on Tuesday, President Duterte asked the policemen and soldiers whose units were taken in Pandi to just let go, as he promised to find them a better housing site within the year.

During inquest proceedings at the Quezon City Police District (QCPD) headquarters on Tuesday, Senior Assistant City Prosecutor Ramoncito Ocampo Jr. said the settlers from Tandang Sora faced charges for trespassing since the lot was vacant when they entered it over the weekend.

The grave coercion charge, meanwhile, was recommended because they allegedly intimidated the property’s caretaker, Danilo Dungo, who let them enter the gated lot owned by businessmen Jose Gil Gonzales and Reynaldo Guiyab.

According to Dungo, the informal settlers banged on the gates of the 1,668-square meter property around 7:45 a.m. on Sunday, demanding entry. Although Gonzales and Guiyab claimed ownership of the property, the families insisted that it remained under dispute.

Several families had already built houses and lived on the land—some for over 30 years—until a court ordered a demolition on June 16, 2016. The families then rebuilt makeshift homes on the periphery of the Apollo lot.

On March 24, the Metropolitan Manila Development Authority informed them that their shanties would be demolished in 10 days. This reportedly forced the families to make another attempt to reoccupy the lot.

‘We are not criminals’

Acting on a complaint from Gonzales and Guiyab, members of the QCPD-Talipapa station rounded up at least 60 people, including 17 minors on Monday afternoon. The minors were later released to guardians, while at least eight senior citizens were among those charged.

Epifania Rufa, 83, told the Inquirer that she was one of the first to live on the lot when it was still a grassland. “We believed it was an abandoned property, so we lived on it,” she said.

But Rufa said they were willing to leave if the other parties would treat them fairly. “We are not criminals. They don’t need to point guns at us.”

Ephraim Cortez of the National Union of Peoples’ Lawyers said the group was considering filing countercharges against the owners and the arresting officers for coercion, illegal arrest and arbitrary detention.

“Many of (the evicted families) had lived on the lot for over 30 years, so it is an abandoned property. And under the Urban Development and Housing Act, that is part of priority for socialized housing,” Cortez said.