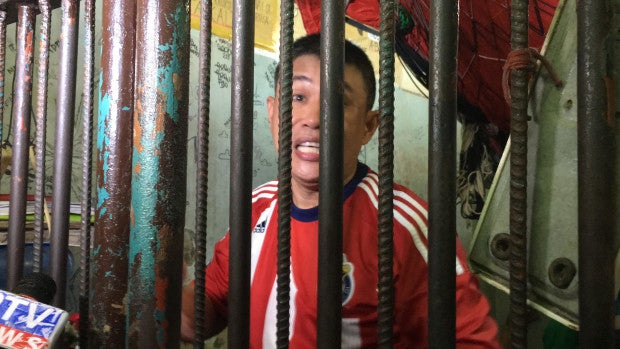 The senior police officer who was arrested by narcotics operatives during an alleged pot session claimed on Friday he may get killed while inside his detention cell in Las Piñas police station.

Cabamongan said his informants told him in a phone call that some police operatives are plotting to kill him while detained.

“They said they are planning to apply a search warrant on me because they will claim that I have a firearm while in jail… The police who will serve the warrant will then kill me,” he said.

“I have already told the police guards here to search now, that I do not have a gun,” he told reporters.

Espinosa and another inmate, Raul Yap, were killed in an alleged shootout with members of the PNP-Criminal Investigation and Detection Group Region VIII in November last year inside the Baybay, Leyte Subprovincial Jail.

CIDG-8 personnel were to serve a search warrant against Espinosa amid an allegation that he illegally possessed firearms.

Cabamongan was arrested with a female cohort, Nedy Sabdao, during a shabu session in a shanty in Everlasting Homes, Barangay (village) Talon 4.

The PNP Crime Lab in Camp Crame in Quezon City said Cabamongan and Sabdao were positive for shabu in the initial tests conducted. Another drug test would be conducted to confirm the results.