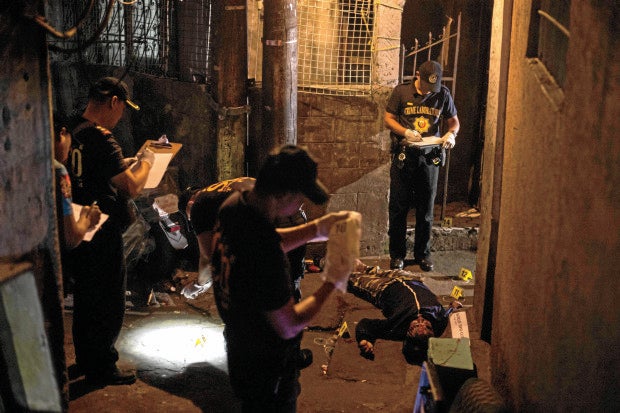 DRUG KILLING Policemen investigating the killing of an alleged drug dealer who was gunned down in Manila. President Duterte has repeatedly warned that martial law may be needed to save the Philippines from descending into drug, crime and terrorism-induced anarchy. —AFP

Three turbulent decades after the Philippines shed dictatorship, President Rodrigo Duterte is offering a return to authoritarian rule as a solution to all the problems that democracy has failed to fix.

In a series of recent speeches, Mr. Duterte has repeatedly said martial law may be needed to save his nation of 100 million people from descending into drug, crime and terrorism-induced anarchy.

Mr. Duterte’s warnings, which echo back to dictator Ferdinand E. Marcos who was toppled in the 1986 Edsa People Power Revolution, are placing intense scrutiny on democratic institutions that have been slowly rebuilt since then.

“I think the situation today is the closest we’ve been to an authoritarian form of government in 30 years,” Jose Manuel Diokno, dean of the College of Law at De La Salle University and one of the nation’s leading human rights lawyers, told Agence France-Presse (AFP).

“There are so many parallels between what’s happening today and what happened before (during the Marcos dictatorship),” Diokno added.

Diokno said one commonality was a climate of fear, created partly by Mr. Duterte’s controversial war on drugs that has claimed thousands of lives since he took office nine months ago.

“The situation today is similar to the Marcos period in the sense that both are fueled by the barrel of the gun,” he said.

Marcos justified his authoritarian rule by what he said was the threat of communism, while Mr. Duterte is doing the same based on drugs and criminality, according to Diokno.

He said some relatives of those killed by police and unknown vigilantes feared retribution if they complained, while intimidation tactics were being used against dissenters.

Solid base of support

Nevertheless, like US President Donald Trump and other populist leaders around the world who are posing challenges for democracy, Mr. Duterte is operating atop a solid base of support.

Many Filipinos have cheered the administration’s antidrug war and believe Mr. Duterte is the strongman needed to radically change a deeply corrupt political system that has created one of Asia’s biggest rich-poor divides.

Mr. Duterte intends to fundamentally reshape Philippine democracy by amending the Constitution to bring about a shift from a unitary and presidential form of government to a federal and parliamentary system.

He has touted his proposal as a way to end the injustices served out by so-called “Imperial Manila,” portraying the capital as home to corrupt elites—in much the same way that Trump has described Washington as a “swamp” that must be drained.

Supporters believe federalism can work and, with a commanding majority in Congress, Mr. Duterte will be able to achieve it.

But critics fear that amending the Constitution, which currently limits the President to a single term of six years, could end up cementing authoritarian rule.

Mr. Duterte has further raised alarm by proposing the return of the Marcos-era Constabulary, a combined military and police force that was one of the dictator’s main ways of suppressing dissent.

Last week, he also raised the prospect of bringing back a Marcos order allowing security forces to conduct searches and arrests without warrants.

“It is a cruel process and it is taken care of by the military,” Mr. Duterte said of warrantless arrests, referring in that context to him being “just like Mr. Marcos.”

With his style of governing, Mr. Duterte is subjecting the country’s democratic institutions to stress tests, according to Ronald Mendoza, the Harvard-educated dean of Ateneo School of Government.

But Mendoza said the change process envisioned by Mr. Duterte could result in some good by identifying the weakest parts of the nation’s young democracy and proving that strong institutions could withstand pressures.

Mendoza cited as a positive factor the Armed Forces of the Philippines, which responded to Mr. Duterte’s warnings of martial law with a statement saying there was no need for it.

The military has also rejected repeated calls by Mr. Duterte, a former city mayor and lawyer, to join the Philippine National Police as frontline enforcers in his war on drugs.

Mendoza pointed to an independent central bank as another bright spot, while Diokno said the country’s feisty media was proving to be an important bulwark for democracy.

‘In a much stronger place’

Mendoza said Congress and the PNP were institutions with weaknesses that had been exposed under Mr. Duterte.

But overall, Mendoza remained cautiously optimistic the Philippines’ democratic institutions and the Filipino people would prevent a slide back to martial law.

“We are in a much stronger place than we were several decades ago,” he said. —AFP