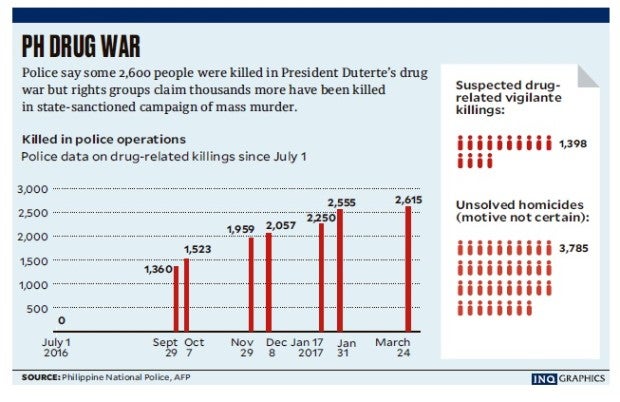 After declining in the last two years, the number of policemen accused of human rights violations rose in the first quarter of 2017, according to data from the Philippine National Police-Human Rights Affairs Office (PNP-HRAO).

Chief Supt. Dennis Siervo, PNP-HRAO head, said his unit would intensify its campaign to educate policemen so that they would not violate human rights, noting that Philippine exports to Europe were in danger of losing incentives if the human rights situation in the country worsened.

But from January to February this year, the number reached 54 (involved in 18 cases), or already more than half of that recorded for the whole of last year.

This developed as only a miniscule number of the nearly 1,400 drug-related homicide cases, which have been recorded since the start of the Duterte administration’s war on drugs, has been solved, according to Philippine National Police data.

Human rights groups and the media cite up to 8,000 deaths in the war on drugs.

A case is considered “solved” if the culprit was arrested and charges filed in court. Another 63 cases were considered “cleared,” which means that although the suspect was identified, he or she was still at large.

“It is only when we have enough evidence that the cases are filed, then we can say a case is solved,” he said.

Siervo said that when he was in Geneva last year, Philippine Ambassador to the United Nations in Geneva Cecilia Rebong told him that queries about human rights in the country must be dealt with “because if they are not satisfied … bear in mind there are 34 (Philippine) products wanting to gain entry in the European market.”

“We were there in May. By end of June or the first week of July, there are 300 plus (Philippine) products that are subject to review. These are Philippine products, our exports,” he added.

Homicide, unlawful arrest The European Union in January said it was reviewing whether the Philippines could still qualify for trade incentives due to concerns about the human rights situation in the country, particularly after the Duterte administration launched its war on drugs.

Siervo said, however, that the war against drugs did not “escalate” the number of human rights violations cases against policemen.

Siervo said it was still too early to tell if the rise in the number of cases in the first quarter of this year would reflect the situation for the whole 2017. “We will have to wait,” he said.

“So, if we think that 56 is already half (of the cases in 2016) then maybe my office will have to step up our drive on how to prevent occurrence of such violations,” he added.

He said the 56 cases this year were mostly homicide and unlawful arrest cases, some of which were related in the war against drugs.

“(If) it results in the killing (of the drug suspect), a homicide case is filed. For me, I think it would be better if we bring these to the courts and we can resolve these cases rather than harp on speculations if it was intentionally done,” he said.

Siervo said the policemen in the homicide cases may be covered by Article 11 of the Revised Penal Code, which set the justifiable circumstances allowing the use of force.

He said Ilocos, Central Visayas and the National Capital Region (NCR) had the highest number of human rights complaints against policemen.

Siervo said the HRAO got its data from the PNP-Internal Affairs Service and the Directorate for Investigation and Detection Management.

HRAO forwards the cases it received to the Commission on Human Rights for investigation, he said.