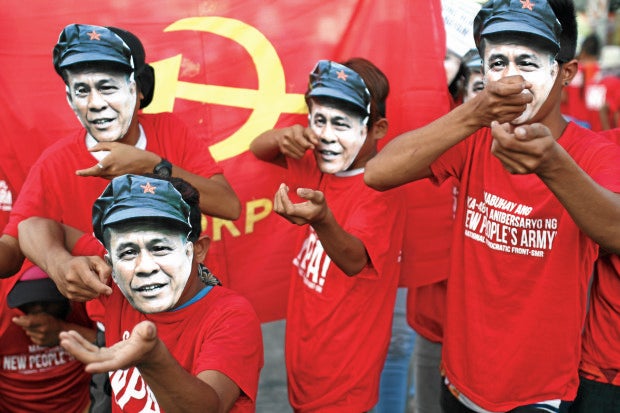 DAVAO CITY — After nearly 50 years since its establishment, the Communist Party of the Philippines (CPP) held its Second National Congress, elected mostly younger and middle-aged cadres to its powerful Central Committee and reaffirmed its armed revolution.

The CPP made the announcement on Wednesday as it marked the 48th anniversary of its armed wing, the New People’s Army (NPA), which celebrated its founding with a lighting rally by some of its members and supporters in Quezon City two days earlier.

In a statement, the CPP said 120 delegates representing nearly 7,000 party members attended the congress on Oct. 24-Nov. 7 last year, after the second round of formal peace negotiations between the communist-led National Democratic Front of the Philippines (NDFP) and the government aimed at ending one of the world’s longest-running communist insurgencies.

Around 60 percent of the delegates were aged 45-59 years and 15 percent were 44 years and younger, it said.

Congress in guerrilla base

The new Central Committee would ensure that the party leadership “will remain vibrant, tightly linked with the lower levels of leadership and capable of leading the practical work and day-to-day tasks of the party, especially in waging revolutionary armed struggle against the reactionary state,” the statement said.

It said the congress, held inside a guerrilla base, was secured by a battalion of armed fighters, an indication that it may have been in Mindanao where the NPA had battalion-sized formations.

It said 45 percent of the delegates represented party members from Mindanao, 40 percent from Luzon, 15 percent from Visayas and the rest from leading organs and commissions.

The CPP said it amended its constitution and the biggest change was the “elaborated preamble” that includes its analysis of Philippine society and its adherence to protracted armed struggle as its principal form of struggle.

“The party program reaffirms the necessity of waging armed revolution in order to counter the armed violence employed by the US imperialists and the local reactionary ruling classes and end the oppressive and exploitative semicolonial and semifeudal system,” it said.

It added a constitutional provision to accept “members of foreign fraternal parties” into the party.

Another new provision specified the right of a party member to retire at age 70 but retain party membership and receive subsistence and medical assistance. An advisory committee would be formed for the retirees.

The congress also approved a resolution giving “the highest honors” to founding chair Jose Maria Sison, calling him a “great communist thinker, leader, teacher and guide of the Filipino proletariat and torchbearer of the international communist movement.”

The CPP said it would continue to seek his counsel and guidance on party work.

In a separate statement on the NPA anniversary, the CPP said it supported the peace negotiations but warned its cadres and fighters of “the dangers of pacification, especially as a result of a prolonged ceasefire without substantial gains for the Filipino people.”