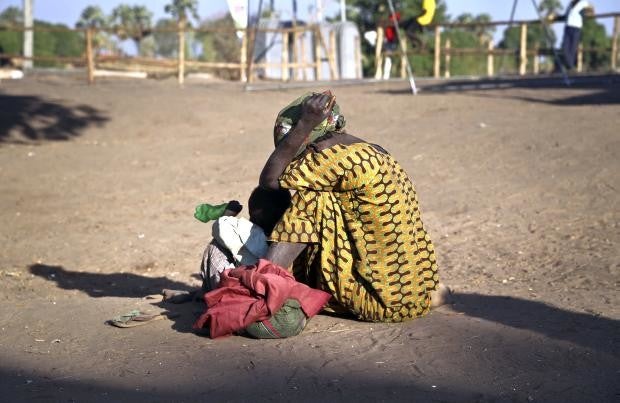 In this photo, taken Feb. 16, 2017, a South Sudanese refugee woman sits with her child at a refugee collection center in Palorinya, Uganda. More than 100,000 people have fled a single county in South Sudan in just three months as civil war continues amid warnings of genocide, and the surge of more than half a million South Sudanese refugees into Uganda since July has created Africa’s largest refugee crisis. (Photo by JUSTIN LYNCH / AP)

MUNDRI, South Sudan (AP) — After months of being raped by her rebel captors in the middle of South Sudan’s civil war, the young woman became pregnant. Held in a muddy pit, sometimes chained to other prisoners, she later watched her hair fall out and her weight plummet. But the child was a spark of life.

And so she named him Barack Obama, she explains, now free. “I still have hope,” she says, caressing the baby’s cheek with a finger. “I just don’t even know where to start.”

The slender 23-year-old is one of thousands of rape victims in South Sudan’s three-year-old conflict, which has created one of the world’s largest humanitarian crises. Sexual violence has reached “epic proportions,” says the UN Commission on Human Rights in South Sudan.

Reported incidents of sexual or gender-based violence rose 60 percent last year. Seventy percent of women sheltering in U.N. camps in the capital, Juba, had been raped since the conflict began, according to a UN humanitarian survey conducted in December.

Mundri, a city of 47,000 people in Amadi state, has been called the epicenter of the problem. Aid organizations blame it on the recent increase in fighting here between rebels and government troops, the latest shift of the war in an already devastated nation.

“I just came back to visit my home and I lost my dreams,” she said in an interview earlier this month. “If I talk about it, I just cry.”

She had been visiting her family in the summer of 2015, with plans to return to school in the capital, Juba. She never made it back.

Instead, she was abducted by rebels loyal to an opposition group calling itself MTN, after a popular African telephone company. Their catch phrase riffs on the company’s slogan, taunting: “We’re everywhere you go.”

The rebels burst through the door of her mother’s hut, firing their weapons and shouting, she said. They were searching for her uncle, who’d been accused of conspiring with government forces.

“They beat my grandfather and aunt and then said if they couldn’t find my uncle they’ll take me instead,” she said. “I told them I’d rather die than go with them.”

But the rebels dragged her into the bush and brought her to their headquarters, where she was charged, tried and convicted for her uncle’s “crimes.”

For the next 16 months, she was forced to live in large, muddy pits infested with snakes, she said. Subsisting on only vegetables, she wasted away.

“I’m not attractive anymore,” she says now, tugging at the waistband of her baggy pants. Shifting around in a plastic chair outside a coffee shop, she shyly adjusted her headscarf, covering what little hair she has left.

She said she was released in December because she became ill.

“They told me to get medicine and then changed their minds and told me to leave and never come back,” she said.

Mundri has many such stories. According to a recent Inter-Agency assessment by international and local organizations focused on gender-based violence, 29 rape cases were reported in Mundri between August and October.

Local organizations say the number is likely double that, but most incidents go unreported because of stigma surrounding rape.

“Realistically, it’s more like over 50 cases,” said James Labadia, founder of MAYA, a local aid organization that focuses on women’s empowerment. He has been working with rape survivors for several years but said things have never been so dire.

The group received funds from the US Agency for International Development last year and Labadia plans to seek more, a possibility which may be clouded by President Donald Trump’s proposed budget cuts.

Reports of rape and abduction are rampant on both sides in Mundri, which is under government control while neighboring villages are held by the opposition.

“They stuck their fingers in my daughter’s underwear,” said another resident, a 26-year-old mother.

In September, two soldiers broke into her house and tried to assault her mother and 9-year-old child, she said. She begged to be raped instead. “If they touched my daughter I would have died.”

The soldiers left her daughter and mother alone and gang-raped her instead, while her family was forced to listen in the adjacent room, she said.

She reported the case to the county commissioner but said no one was ever arrested. She lives in fear it will happen again.

“The government has put out a new law that any soldier who misbehaves will now be punished,” Kenyi said. As of January, he said, anyone convicted of rape will be sentenced to prison.

During the town’s first International Women’s Day celebration since 2014 earlier this month, Kenyi called on men and women to work together to combat sexual assault.

“Come out from the fear,” he said.

But survivors say what they really want is to rebuild their lives.

Since returning to the community, the 23-year-old rape victim has received psychosocial support from MAYA’s staff and joined a women’s empowerment group. They’re launching business initiatives such as selling soap and baked goods in hopes of helping women become self-sufficient.

Ultimately, her dream is to return to school and become a nurse.

“I can’t give up,” she said. “I need to continue going to school and fighting for my rights. When you get the woman, you get the nation.” –Sam Mednick

Read Next
Pope puts focus on peripheries during Milan pastoral visit
EDITORS' PICK
vivo’s coming to town to grant wishes with more holiday promos
Is it safe to talk politics again at family gatherings? ‘The Reconciliation Dinner’ shows us what that’s like
The Best Tech Gifts For The 2022 Holidays
House energy committee chair Arroyo bats for cheap electricity
Pagasa: Warm, sunny Sunday in most parts of PH
EDITORIAL: To a bike-friendly future
MOST READ
LOOK: Vhong Navarro transferred to BJMP detention facility in Taguig
The Elephant Man in the Senate
Posh village as ‘shabu’ haven
LOOK: Zanjoe Marudo bonds with Ria Atayde, her family
Don't miss out on the latest news and information.