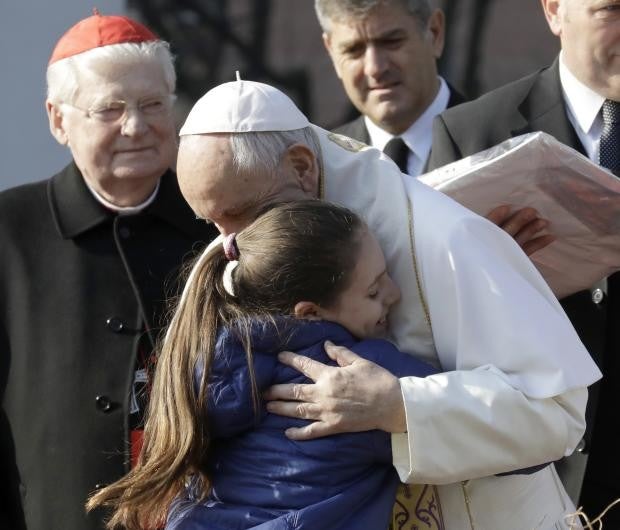 Pope Francis hugs a girls at Milan’s Forlanini neighborhood known as Case Bianche (white houses), as part of his one-day pastoral visit to Monza and Milan, Italy’s second-largest city, Saturday, March 25, 2017. The pope’s first stop Saturday is a housing project on the outskirts of Italy’s fashion and finance capital, a stop that underlines the pope’s view that the peripheries offer a better view of reality than well-tended and prosperous city centers. In the background at left is Cardinal Angelo Scola. (Photo by ANTONIO CALANNI / AP)

MILAN — Pope Francis began his one-day visit Saturday to the world’s largest diocese with a stop in a housing project on the city’s outskirts, emblematic of his view that the peripheries offer a better view of reality than the well-tended and prosperous city centers.

The pope told thousands of faithful assembled that it was important for the Roman Catholic Church “not to remain in the center to wait, but to go toward everyone, in the peripheries, to go toward also non-Christians and non-believers.”

The housing project on the edge of Italy’s wealthy finance and fashion capital is home to more than 1,000 people, including many elderly and foreigners living on the margins of society. The pope made private visits to three families, one couple in their 50s struggling with infirmity, another couple in their 80s dealing with illness and a third family originally from Morocco that is engaged in teaching Arabic.

Children presented Francis with two gifts, one a priest’s stole hand-made and embroidered by a neighborhood cooperative that he wore immediately, and the second a painting of the local church’s statue of the Madonna, which has recently been restored.

Francis said the presence of the Madonna to welcome him to Milan reminded him of his boyhood with friends, “when we returned from school and there were our mothers at the door for us.”

Before leaving, he took time to shake hands and sign autographs with the faithful, who snapped photographs with cellphones.

Francis’s next stop is a blessing at the Gothic-era Duomo cathedral that is the home to Cardinal Angelo Scola, who was considered his main rival for the papacy. He also will visit city’s main prison and say an open-air Mass.

It is the fifth papal visit to Milan, the world’s largest parish with 5 million faithful, including two by Pope John Paul II and one by Pope Benedict the XVI. –Colleen Barry