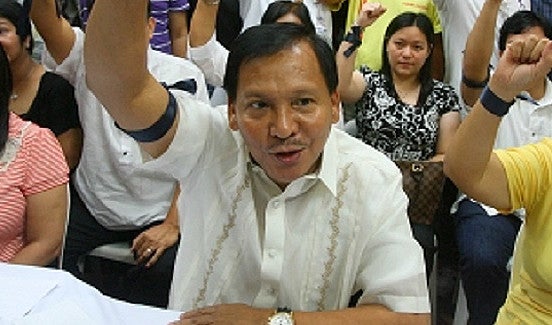 Echiverri posted a P30,000 bail before the Sandiganbayan Second Division for one count of graft for violation of Section 3(e) of the Anti-Graft and Corrupt Practices Act.

He was accused of graft over an anomalous P2.751 million contract for the improvement of Molave St. drainage system to E.V. & E. Construction.

Prosecutors said the Echiverri and his co-accused caused undue injury to government and gave undue benefit to the contractor because it was awarded without prior authorization of the Sangguniang Panglungsod, “to the damage and prejudice of the government.”

Echiverri was charged with a second count of graft before the Third Division over an anomalous P1.962 million contract to Golden 3T Construction for the improvement of Saplungan St. drainage system also without prior authorization of the Sanggunian Panlungsod.

Echiverri was at the Sandiganbayan premises on Thursday when he was served an arrest warrant by the Third Division. He immediately posted a P15,000 bail after the court allowed to reduce the amount.

Centeno and Garcia had also been charged with two counts of falsification of public documents punishable under the Revised Penal Code for “feloniously” making false statements in the narration of facts.
READ: Echiverri indicted again for graft

Prosecutors said they certified in the allotment and obligation slip about the appropriation and obligation of allotment for the drainage projects “when in truth and in fact, as the accused very well knew, there was no appropriation for the said project, to the prejudice of public interest.”
Echiverri is a former Caloocan representative who lost his bid for mayor in last year’s elections to Oscar Malapitan.

Under Section 3(e) of Republic Act 3019, public officials are prohibited from causing any undue injury to any party, including the Government, or giving any private party any unwarranted benefits, advantage, or preference in the discharge of his official administrative or judicial functions through manifest partiality, evident bad faith, or gross inexcusable negligence. JE/rga