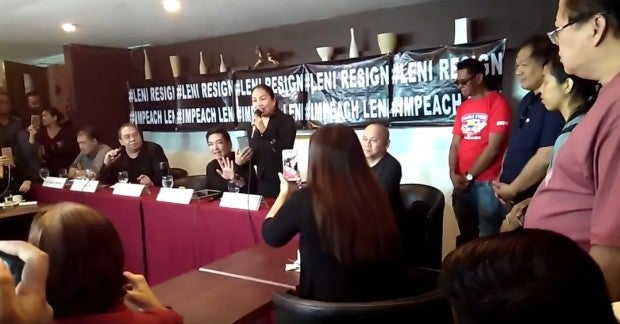 Reporters and a group mulling to impeach Vice President Leni Robredo faced off in a tense press conference on Thursday.

This started when Atty. Bruce Rivera, who once served as lawyer for accused pork barrel scam mastermind Janet Lim-Napoles, was asked by DWIZ reporter Jill Resontoc about their principal group that may have funded the planned impeachment complaint against Robredo.

(Who’s your principal? Who is funding this to keep alive the impeachment?)

Instead of answering the question, Rivera immediately denied President Rodrigo Duterte was behind the impeachment complaint. Duterte earlier thumbed down an impeachment move against Robredo, although he did tag the vice president as among those who wanted him ousted.

Rivera also dismissed that having a “principal” was a strategy for Robredo’s political party, the Liberal Party.

“There’s a popular misconception we are funded by anyone. We are not funded by anyone… We have our own careers at hand… It does not make us a principal, it does not make Duterte our principal. We support him but ibig bang sabihin, si Duterte na aming backer? Hind po totoo ‘yan. LP ang dialogue na ‘yan,” Rivera said before laughing, cheered on by his supporters at the sidelines.

(We support him, but does that mean Duterte is our backer? That’s not true. That dialogue is for the LP.)

(That question was straight up clean.)

Vivian Velez, a former sexy actress and known anti-Robredo protester, was seated between the reporter and Rivera.

Doing a Facebook live of the press conference, Velez retorted to the reporters behind her: “Malinis din ‘yung sagot namin!” (Our answers are straight up clean, too!)

The group of supporters raised their firsts and cheered Rivera on, while some cameramen cried foul over being tagged as “biased” by the supporters of Duterte.

“For all Filipinos!” one supporter chanted.

Even Department of Interior and Local Government Assistant Secretary Epimaco Densing III, who attended the press conference to support the impeachment bid, had this to say: “Kung hindi ka press, lumabas ka (If you’re not a member of the press, get out).”

Atty. Trixie Cruz-Angeles had to intervene to cool down both camps for the press conference to resume.

“Please stand down,” Cruz-Angeles pleaded. Angeles was earlier suspended by the Supreme Court for three years for violation of the Code of Professional Responsibility for receiving legal fees for an annulment case without filing the petition.

When heads cooled down, Rivera resumed his statement and denied their group had Duterte’s backing.

“We don’t need Duterte. We need him to do his job as president. Not just a President to the Duterte supporters, but to the Filipino people,” Rivera said.

The group said they would file an impeachment complaint against Robredo for betrayal of public trust, culpable violation of the Constitution, and other high crimes, particularly following her video to the United Nations criticizing the administration’s war on drugs.

The complainants alleged Robredo committed an impeachable offense for painting a picture of the country in a bad light. Speaker Pantaleon Alvarez has vowed to pursue the impeachment complaint.

Impeachment moves against Robredo gained traction since Magdalo Rep. Gary Alejano filed an impeachment complaint against  Duterte for the latter’s alleged hand in the vigilante killings by the Davao Death Squad and the spate of extrajudicial killings at the height of his administration’s war on drugs, as well as his alleged P2.2 billion hidden wealth. JE/rga

Read Next
Pangilinan on oust-Duterte plot: We’re in democracy, not dictatorship
EDITORS' PICK
Metro Manila’s COVID-19 cases on downward trend, but surge not over — OCTA
Palace warns sugar hoarders after raid on Pampanga warehouse
House energy committee chair Arroyo bats for cheap electricity
Unleash the photographer in you this World Photography Day with vivo smartphones
Look Through: The fate of impounded stray dogs
What to watch out for when selecting a video surveillance solution
MOST READ
Man abducted in Batangas gasoline station, found dead in Quezon
LOOK: Miel Pangilinan dazzles in glittery pre-debut shoot
Vice Ganda dismisses rumors he broke up with Ion Perez: ‘Masaya kami’
Palace warns sugar hoarders after raid on Pampanga warehouse
Don't miss out on the latest news and information.