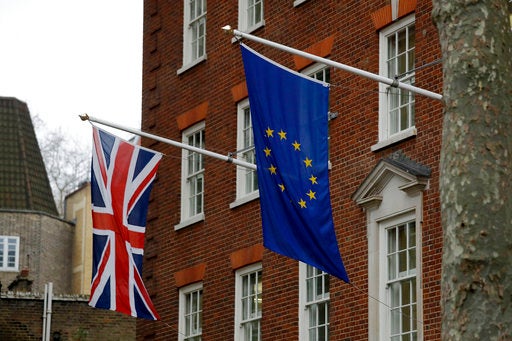 A European and British Union flags hang outside Europe House, the European Parliament’s British offices in London, Monday, March 20, 2017. Britain’s government will begin the process of leaving the European Union on March 29, starting the clock on the two years in which to complete the most important negotiation for a generation.AP PHOTO

BRUSSELS, Belgium—European Union leaders gather in Rome this week to proclaim their “common future” on the bloc’s 60th birthday, despite a wave of crises including Britain’s looming exit from the bloc.

The 27 leaders will use Saturday’s anniversary of the signing of the Treaty of Rome on March 25, 1957, to hail the peace and prosperity they say the project has brought Europe in the aftermath of World War II.

But the ghost at the banquet will be British Prime Minister Theresa May, who instead of joining the party in the splendor of a 16th-century palazzo will be in London preparing to trigger the Brexit divorce just four days later.

From migration and terrorism to populism and the eurozone debt crisis, Brexit is one of a host of existential challenges clouding the birthday celebrations of a union formed to rebuild Europe from the ashes of war.

Perhaps seeking divine inspiration to help with their troubles, the EU leaders will have a special audience with Pope Francis at the Vatican on Friday afternoon.

On Saturday they will gather for a ceremonial meeting in the Hall of the Horatii and Curiatii, in the Palazzo dei Conservatori on the Capitoline Square, the same place where the Treaty of Rome was originally signed.

They will issue a declaration that “Europe is our common future” in a rapidly changing world and set out a roadmap for the next 10 years, before posing for a “family photo”.

‘Challenges for the union’

But in a sign of the underlying tensions in today’s union, there are still last-minute rows over how far the declaration will go in suggesting that EU states can have “different paces and intensity” of cooperation.

EU President Donald Tusk said in his summit invitation letter that Rome would be an “opportunity to celebrate our history together and take stock of sixty years of integration.”

He warned of the challenges ahead in a changing geopolitical situation, including an uncertain ally in US President Donald Trump, an aggressive Russia and increasing protectionism.

Crucial elections this year in France — where far-right leader Marine Le Pen has been showing strongly in polls — and Germany are adding to the general sense that Europe is at a turning point.

“It is no secret that the historical moment we are facing requires deeper and more solid reflection on the challenges for the union,” Tusk, a former Polish premier, said.

Sixty years ago it was just six countries — Belgium, France, Italy, Luxembourg, The Netherlands and West Germany — that joined to form the European Economic Community.

Now called the European Union, it has since expanded to become a political and economic bloc that covers 28 countries with 508 million people, together representing the world’s largest economy.

But cracks have appeared in recent years, with its rapid expansion into the former Soviet-dominated east and the problems of managing the single euro currency.

The rise of nationalist and populist parties poses a particular threat to the EU’s dream of itself, particularly in Poland, Tusk’s homeland.

The run-up to Rome was marred by a nasty spat between Brussels and the rightwing government in Warsaw, which was furious when EU leaders overrode their objections to give Tusk a new term as president until 2019.

Poland has now warned that it will not accept a “multi-speed” Europe that would leave some countries behind while the Franco-German “engine” of Europe powers ahead.

But Berlin and Paris want to be allowed to cooperate more closely on matters such as defense and the economy, if the EU is to move on from the trauma of Britain’s June 2016 vote to become the first country to leave the union.

“In reality, those who fear this multi-speed Europe are afraid of being relegated to the second division,” Charles de Marcilly, of the Schuman Foundation think-tank in Brussels, told AFP.

“It will be a difficult balance to advance without excluding and to progress without stigmatizing.”

For her part, May “sends her very best wishes” to her EU colleagues, the British premier’s spokesman said, adding: “The EU 27 are moving in one direction, the British public voted to go in another direction.”