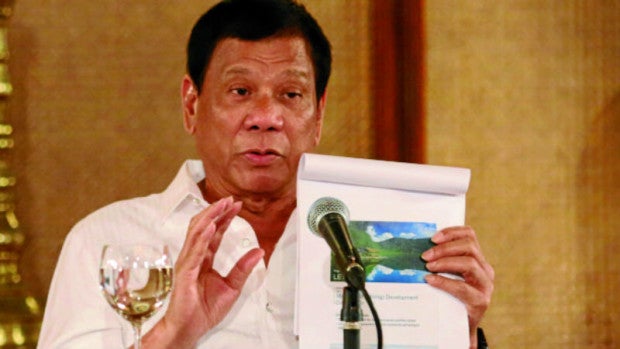 MINING ISSUES President Duterte discusses the effects of mining and other issues during a press conference in Malacañang. —JOAN BONDOC

President Duterte on Monday raised the possibility of a total ban on mining in the country, as he accused mining companies of funding efforts to destabilize his administration.

Mr. Duterte, however, did not cite specific acts of destabilization or name anybody behind the supposed attempt to destabilize the government.

The Chamber of Mines of the Philippines (COMP) issued a statement denying its members were involved in any destabilization attempt against the Duterte administration.

Speaking in a press briefing in Malacañang, Mr. Duterte ranted about the destructive effects on the environment of the operations of big mining companies.

He said it may be “worthwhile” for Environment Secretary Gina Lopez to enforce a ban on mining given the environmental damage that producers have caused.

“Total for now, then we talk. We can be frank with each other,” Mr. Duterte said.

Belittling the P70 billion in taxes the country gets from the mining industry, Mr. Duterte said he needed to talk to the mining operators.

He charged that certain mining operators were planning to remove him and replace him with someone who would do their bidding.

“You in mining, I know that you are funding the opposite side. I know who is the one spending. I know some of you are giving funding to the other side to destabilize me,” he said.

But COMP quickly denied the charge.

“Our member companies vehemently deny any involvement in any destabilization efforts against the administration,” the group said.

“We condemn such efforts and reaffirm our commitment to work with this administration, and to follow the law and the Constitution,” it added.

Showing pictures of the aftermath of mining operations, Mr. Duterte also demanded an explanation from the mining companies of the effects of their activities, including polluted bodies of water.

“Explain to me why it is like this. Explain to us and the lawmakers,” he said.

Pointing to pictures of polluted waters, Mr. Duterte lamented that the poor people living in mining sites have lost their sources of food.

“So what can your P70 billion do for the government? Nothing,” he added.

COMP blamed the pictures on opponents of mining, who it said were spreading “misinformation.”

“The pictures given to the President show active mining areas and do not present a complete picture of responsible mining,” it said.

“Like any project still under construction, an active mine does not look green or pleasing to the eye. However, mining areas, once completed, are rehabilitated, planted with local species, and made useable for agriculture or forestry, or preserved as an ecotourism site. We will be glad to clarify this matter with the President, if given the opportunity,” the group said.

Mr. Duterte said he still supported Lopez, whose nomination has met with stiff opposition from the mining industry in the Commission on Appointments.

He also said he would direct the Philippine National Police to stop miners from using explosives to dig into the earth.

Asked how a mining ban would be enforced, Mr. Duterte said he would just direct the military to arrest the miners.

“If they would not be arrested, I would drop them in the pit and then cover it,” he said.

In explaining his plans, Mr. Duterte said he would do what was necessary to preserve the environment, including natural resources, and the people.

He lamented that the government was going after small kaingin, or slash and burn, farmers and yet allowing mining.

“Where’s the justice for the Filipino? We might as well resign because we cannot do anything rather than bear the burden of not being able to answer because you have done nothing,” he said.

As for the workers to be affected by the closure of the mines, he said he would “scrape the bottom of the barrel” to give them money.

He also promised to give them food.

“Let’s pray enough business would come in but not as devastating as this one,” he added.

Mr. Duterte noted, however, that there were responsible mining operations in the country.

“If this is what you would do, I would give you the monopoly,” he said.

In its statement, COMP said it shared the concerns of Mr. Duterte about the environment and the communities affected by mining.

“Like the President, the Chamber of Mines and its member companies are also committed to responsible mining and [to] ensuring that mining is done under the highest standards and using the best technology available. Our member companies are all ISO14001 compliant, and consult with Australian and Canadian consultants in the course of their operations,” the group said.

COMP said it condemned all illegal and irresponsible mining activities being undertaken by unscrupulous individuals and companies that had obtained permits from either the national or local governments.

“Illegal mining is a scourge that must be eliminated, and we are committed to help [the] government achieve this objective in any way we can,” it said. —WITH REPORTS FROM JAYMEE T. GAMIL AND THE WIRES