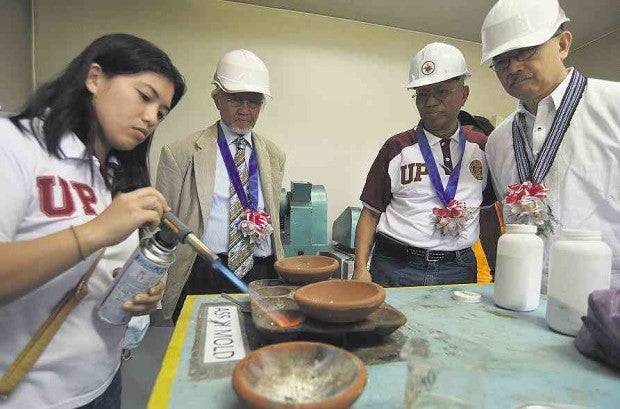 CLEAN GOLD Small-scale miners in Benguet province will start processing gold using clean technology developed by the University of the Philippines through the help of the Department of Science and Technology. —EV ESPIRITU

ITOGON, BENGUET—The country’s first gold processing system that does not use mercury and cyanide was turned over by Science Secretary Fortunato de la Peña to small-scale miners in Benguet province on March 10.

The facility was developed by mining engineers of the University of the Philippines (UP), who put together a system that uses nontoxic and established scientific procedures for separating valuable metals from ore.

A P25-million pilot facility was set up here by the Department of Science and Technology (DOST) for field tests.

Three other plants are being built for small-scale mines in Agusan del Norte and Camarines Norte provinces, and Compostela Valley region.

The Benguet plant was the first to become operational. It sits on a lot that has been identified by Environment Secretary Gina Lopez as site for a Minahang Bayan in the province.

“If that Minahang Bayan is approved, this [gold processing] plant will make it the cleanest small-scale mining area,” said Lomino Kaniteng, president of Benguet Federation of Small-Scale Miners, the group tasked with operating the facility.

According to Mendoza, the processing system tries to replace the harmful chemicals used by small-scale miners to extract gold and copper from ore.

The plant is capable of processing up to 15 metric tons of gold ore a day and can recover up to 80 percent of metals from ore, he said.

Benguet miners are going to operate the plant, which was designed to reduce the impact of mining on the environment.

According to Mendoza, the system expels clean water and solid waste that can be used as material for construction projects.

“We used taxpayers’ money to develop this for Filipinos. Let’s spread [the green technology],” he said. —EV ESPIRITU AND VINCENT CABREZA

Read Next
Duterte mulls over total ban on mining
EDITORS' PICK
Nestlé Philippines’ ‘NESCAFÉ Plan’ bags Grand Anvil at PRSP 56th Anvil Awards
822 NPA-free barangays set to get P20-M gov’t aid — Esperon
Pope Francis to meet top cleric Sistani on second day in Iraq
Don’t waste the hope of vaccines, warns WHO
Every Filipino home can now be a smart home with realme TechLife
Smart reinforces superiority with best speed and mobile video experience in PH
MOST READ
Robredo on Sara Duterte leading poll surveys: Why are Filipinos drawn to leadership of this kind?
So: I lacked connections to succeed in PH ‘culture’
US weapons, hardware in exchange for VFA
3,439 new COVID-19 cases push PH’s total to 591,138
Don't miss out on the latest news and information.