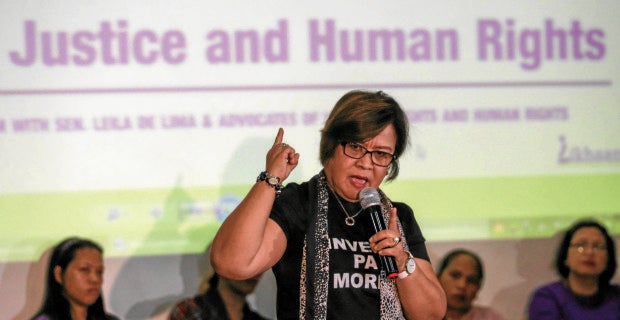 Detained Sen. Leila de Lima defended the 2009 investigation of the infamous Davao Death Squad (DDS) she spearheaded when she was still chair of the Commission on Human Rights.

In a handwritten letter, De Lima said the probe did not lead to anything concrete because there were no testimonies from witnesses to back the commission’s findings then.

“People ask—How come nothing concrete came out from the 2009 CHR probe re DDS in terms of exacting accountability from then Mayor Rodrigo Duterte? The simple answer is—there were no Matobatos and Lascañases back then,” De Lima said, referring to confessed DDS hit men Edgar Matobato and retired SPO3 Arturo Lascañas, who surfaced in the Senate and affirmed the existence of the vigilante group.

During the 2009 investigation led by De Lima, the CHR team recovered sets and fragments of human bones from a firing range known as the Laud quarry in Davao, where Lascañas said bodies of DDS victims were dumped. But the CHR was not able to present a complete human skeleton.

According to a July 2009 news release, the CHR said the diggings were done based on the search warrant issued by the Regional Trial Court Branch 34 of Manila. It said: “The site is believed to be the dumping ground of bodies of victims of summary killings, according to informants of the CHR.”

But no charges were filed against anyone even after the recovery of bones.

Following the testimonies of Lascañas and Matobato, De Lima said the country could not just be like the “bewitched” city of Davao which supposedly regarded then Mayor Dutetre as “king” and treated CHR investigators as their “enemies.”

“And the city of Davao was then and perhaps still is under the spell of their ruthless king. We (the investigators) were regarded as “enemies” and “intruders” into their kingdom engulfed by a false sense of peace and order,” she said. “I pose the question now—Is the entire country, even after hearing the harrowing testimonies of Matobato and Lascañas, be just like Davao City?”

The Senate committee on public order led by Sen. Panfilo Lacson concluded its probe into Lascañas’ claims after just one hearing, with some senators casting doubt on the retired policeman’s credibility. Retracting his previous testimony in the Senate, Lascañas affirmed DDS’ existence and tagged Duterte in the summary killings of criminals and enemies in Davao City.

De Lima, who is currently detained at the police custodial center over drug allegations, lamented that some of her colleagues in the Senate were tarnishing the truth by pouncing on the confessed DDS leader’s admissions.

(Our world has been turned upside down. Those who lie outright and give glaring inconsistencies in their statements are the ones being believed and rewarded. But the credibility of those who are telling the truth like Matobato and Lascañas is being questioned by some senators.)

“It is tragic that our society’s norms of what is right and wrong have been shattered in favor of lies and deception,” the senator added. IDL/rga