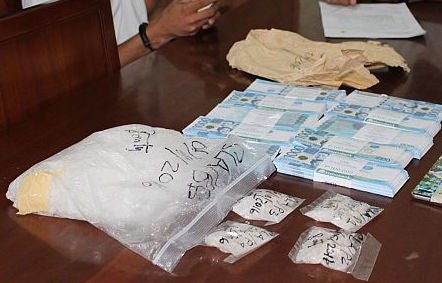 DAGUPAN CITY — Six drug suspects were caught with P500,000 worth of shabu (methamphetamine hydrochloride) in a suspected drug den in Sta. Barbara town in Pangasinan province.

Suspected drug dealer Cherry Ann Corpuz was arrested after she sold P6,000 worth of shabu to an undercover agent of the Philippine Drug Enforcement Agency (PDEA) at her house in Barangay (village) Minien West in Sta. Barbara at 10:30 p.m. Tuesday (March 7).

Camacho said the Corpuz house had long been suspected of being a “one-stop-shop” for shabu and other illegal drugs.

Except for Corpuz and Naungayan, who surrendered to the police at the start of “Oplan Tokhang” last year, the rest were not on the town’s drugs watchlist.

Seized during the raid were 25 grams of shabu, a sachet of dried marijuana leaves,  drug paraphernalia, mobile telephones and a motorcycle.  SFM/rga