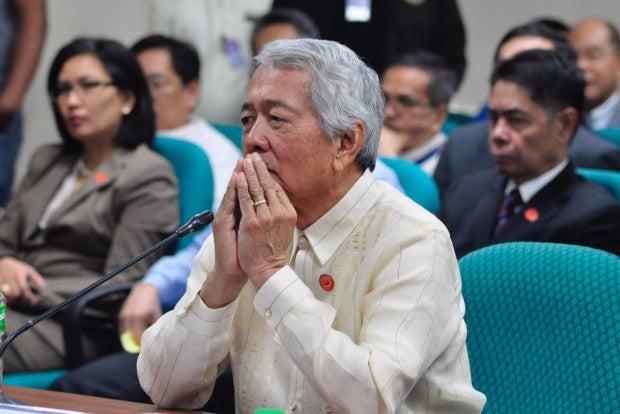 Foreign affairs secretary Perfecto Yasay faces the grilling of the Commission on appointment at the Senate. Inquirer/Grig C. Montegrande

Lawmakers on Wednesday rejected the nomination of Foreign Secretary Perfecto Yasay Jr. after ruling that he lied to them about his American citizenship.

By rejecting his nomination, the Commission on Appointments (CA) effectively fired Yasay, throwing the Philippines’ diplomatic leadership into turmoil at an important time for the country, which holds the rotating chair of the Association of Southeast Asian Nations (Asean).

Acting secretary to be named

Presidential spokesperson Ernesto Abella said the Office of the Executive Secretary would communicate with the Department of Foreign Affairs (DFA) by 8 a.m. Thursday.

“Announcement will be forthwith,” Abella said.

The DFA spokesperson, Assistant Secretary Charles Jose, said the department would wait for Mr. Duterte’s appointment of an acting secretary.

It was unclear on Wednesday what steps the government would take against Yasay for concealing his US citizenship as he served as associate commissioner at the Securities and Exchange Commission (SEC) from 1993 to 1995 and as chair of the body from 1995 to 2000.

He was the first Duterte nominee to be rejected by the CA.

In an extremely rare move, the CA unanimously voted to reject Yasay’s nomination following tense confirmation hearings in which he admitted to misleading the lawmakers.

“He was not telling the truth. He was not being forthright in the question-and-answer portion of the (confirmation) hearings,” Lacson said.

But the Inquirer, citing documents that contradicted Yasay’s declaration, reported on Feb. 27 that Yasay was granted American citizenship in 1986.

The documents also showed that Yasay formally renounced his American citizenship at the US Embassy in Manila on June 28 last year, just two days before Mr. Duterte appointed him to head the DFA.

In a television interview on Monday, Yasay admitted he once carried a US passport, but said he had returned it along with his naturalization certificate.

He said he renounced his US citizenship in 1993 and that the document he filed in Manila last year was only for confirmation and reiteration of his renunciation.

On Wednesday, Yasay faced the CA again and was grilled over the documents that showed he was granted US citizenship in 1986.

He insisted that he never lied about his citizenship but apologized for “inadvertently misleading” the commission.

His last stand collapsed when Mindoro Rep. Josephine Ramirez-Sato asked him to answer categorically yes or no whether he once became an American citizen.

“I wish I could answer that question with a yes or no, but as directly as I could in answering that question, I have always admitted that I was granted US citizenship. That’s my answer,” Yasay said.

Yasay held that he was “ineligible and disqualified” to become a US citizen because he had no intention to reside in the United States, a view that he stated in an affidavit that he handed to Sato after the initial hearing on Feb. 22.

On Wednesday, he told the lawmakers that his US citizenship was void because the US Immigration and Nationality Act “provides that anyone who has preconceived intent to abandon his residency at the time of application is disqualified to that grant.”

“Am I to believe you can lose [your] American citizenship by your own personal preconceived intention that you will not permanently reside in the US?” Sato asked Yasay, reminding him that he swore allegiance to the United States when he took his oath as a US citizen.

“For lack of a better term, you fooled the USA when you applied for citizenship with a preconceived intention not to reside permanently in the US and abandon your citizenship in that country. Were you truthful in your oath [to] that country?” Sato asked.

Replying, Yasay admitted there was a “misrepresentation on my part for not divulging that.”

San Juan Rep. Ronaldo Zamora moved to end the questioning of Yasay, and the 15 committee members withdrew behind closed doors to vote whether to reject or confirm his nomination.

“Let this be a reminder to everyone present in this hall, that by definition, an oath is a solemn declaration, accompanied by a swearing to God or a revered person or thing, that one’s statement is true or that one will be bound to a promise,” Lacson said.

“The person making the oath invites punishment if the statement is untrue or the promise is broken. The legal effect of an oath is to subject the person to penalties for perjury if the testimony is false,” he said. —WITH REPORTS FROM LEILA B. SALAVERRIA, JEANNETTE I. ANDRADE, MAILA AGER AND AFP