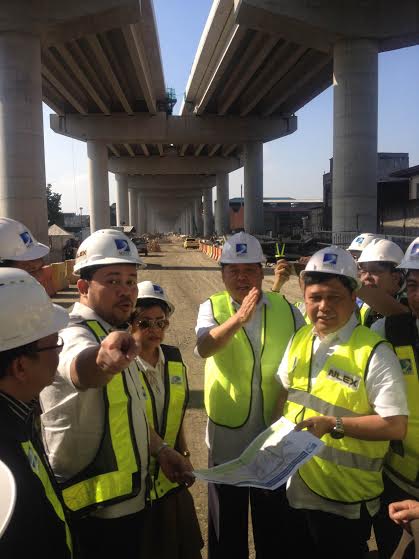 CITY OF MALOLOS — Public Works Secretary Mark Villar on Wednesday (March 8) formed a task force to speed up the acquisition of properties located in the way of a 10.5-kilometer highway project that would link the North Luzon Expressway to the North Harbor.

Rod Franco, president of the NLEX operator Manila North Tollways Corp., said the project has been delayed for almost a year due to right of way problems.

Villar said he wanted the road to be completed and opened by the end of 2017 to help decongest traffic in Metro Manila. The project connects the Manila Port Area to northern and central Luzon provinces, improving the movement of cargo.

Villar and MNTC officials inspected completed stretches of the road, as well as settlements on lands owned by the Philippine National Railways along Karuhatan village in Valenzuela City.

Franco said the acquisition of road-right-of-way lands has been taking time, causing the delay, but Villar promised to use the expropriation powers of the Department of Public Works and Highways to ensure that
the road would be open to traffic by December.

The NLEX Harbor Link project started in 2013. Segment 9 of the project, spanning 2 kilometers, was completed in 2015 and is currently operational.  SFM