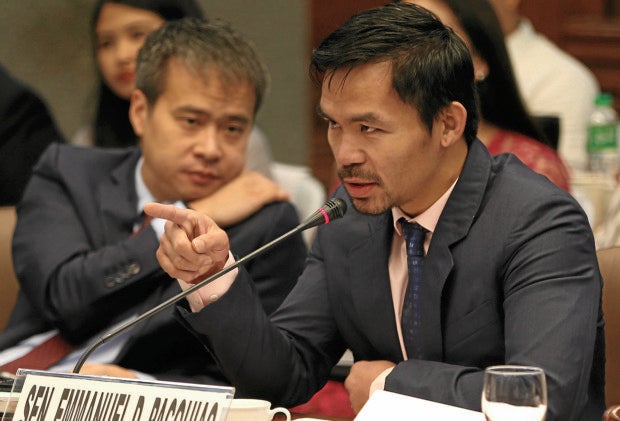 You can attack the President, just don’t  give    the Senate a bad name.

This was  how neophyte Senator Manny Pacquiao  reacted to Senator Antonio Trillanes  IV’s statement  against  some senators who lectured  retired SPO3 Arturo Lascañas about spiritual   renewal  during the hearing of the Senate committee on public order and dangerous  drugs last Monday.

Taking the floor on Wednesday, Pacquiao said he was offended  by Trillanes’ statement  that  like some of his colleagues,  Lascañas did not also become  a saint  after his  spiritual renewal.

“As senators, we are  not  imposing  our morals  on our resource persons. And for the record, I’m not imposing my morals on SPO3 Lascañas. I  (was) just offended,  Madam President, by the statement  of my colleague, Senator Trillanes.”

“Wala naman talagang Santo dito. We all commit sins. Wala ni isa sa ating gumawa ng kasalanan at walang kasalan. For the record, I did  not become  a saint after my spiritual renewal…,”  Pacquiao added.

He said he was “very offended” by Trillanes’ remark  because it appeared that he was a “fake” Christian.

“Para bang hindi ako totoong tao, para bang yung pagiging Christian ko e fake. That’s my understanding, Madam President, and that’s very  offended  to  me. Good thing that I have Jesus in my life or else I will run to his chair  and then hit him right away …,” the neophyte senator said.

“We are not saints here but we’re called to do what is right and just. Just to remind  everyone, pinag-aral naman tayo para marunong mag respeto  sa ating kapwa. Like I said even in the (Senate lounge that when you get interviewed  in  the media),  you don’t attack your colleagues, or else… hindi naman tayo, hindi naman natin iniwanan ang bayag natin, dala dala natin ang bayag natin,”  he added.

Pacquiao said anyone who is against President Rodrigo Duterte may file an impeachment  against  him in Congress but just don’t give the Senate a bad name.

Trillanes also  stood up on the floor and clarified that  he did not allude to Pacquiao when he made the remark in the media.

“Let me assure the gentleman, Madam President, that this representation e walang planong  dungisan ang panglaan ng Senado. I have submitted always to the will of the majority…”

Trillanes nevertheless apologized  to Pacquiao, saying it was not his intention to  offend him.