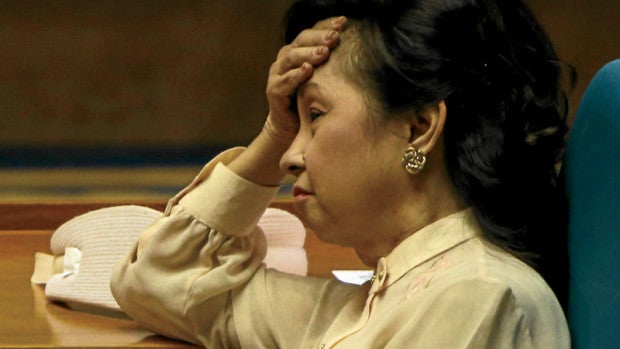 Speaker Pantaleon Alvarez on Wednesday said it was only a matter of time before Pampanga Rep. Gloria Macapagal-Arroyo and other lawmakers would be relieved of their leadership and committee positions after voting against the restoration of the death penalty.

In an ambush interview with reporters, Alvarez said the House plenary would soon declare their positions vacant following his vow to strip anti-death penalty lawmakers of their juicy positions.

READ: Alvarez warns House allies: Back death penalty, or else…

(The majority leader and I will talk about changing the chairmanship of the committee and the deputy speakers who voted no to the death penalty.)

Asked about former president Arroyo, a deputy speaker, Alvarez said: “It is as good as day follows night.”

Alvarez said it’s too late for the lawmakers to appeal their removal from their positions.

For his part, majority leader Ilocos Norte Rep. Rudy Fariñas said he has talked to Alvarez and pleaded to let him handle the matter.

Fariñas said there will be no declaration of vacancy of seats yet, which would pave the way for a major shake-up in the lower House following the death penalty vote.

“No replacements in the leadership positions will happen, yet. I made a plea to the Speaker that he will allow me to handle the matter, which he has kindly granted while saying ‘only because I trust your judgment,'” Fariñas said.

Speaker Pantaleon Alvarez earlier threatened to strip lawmakers voting no to the death penalty of their committee positions and deputy speaker posts.

There was talk about Arroyo replacing Alvarez as speaker because Alvarez might join the Cabinet of President Rodrigo Duterte – a rumor both Alvarez and Arroyo denied.

The House of Representatives in a vote of 217 passed on final reading House Bill 4727 that seeks to restore the death penalty for drug-related offenses.

Fifty-four lawmakers voted against the bill.

Back for her last term as congresswoman after being detained for plunder over a charity funds mess during her presidency, Arroyo is the only deputy speaker who voted against the death penalty.

It was during her term when Congress abolished the death penalty in 2006.

Deputy speaker Ilocos Sur Rep. Eric Singson did not vote because he was then the presiding speaker.

Other duties under the rules include:

The former President won a seat in the House as Pampanga congresswoman while in detention for plunder over the alleged misuse of P366 million in Philippine Charity Sweepstakes Office intelligence funds from 2008 to 2010.

She held office at the Veterans Memorial Medical Center where she was detained for the duration of the previous Congresses.

Arroyo walked free at 6:30 p.m. on July 22 last year, after the Supreme Court dismissed her plunder case. The High Court ruled that her approval of the P366 million intelligence fund releases were only ministerial and did not constitute an “overt act” to commit plunder. CBB