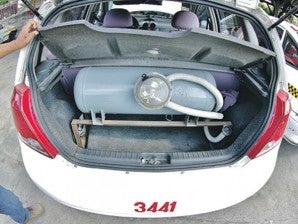 HAZARDOUS A filler valve inside the trunk greatly increases the risk of LPG leaking into the trunk and the passenger cabin. ALEX P. LOINAZ/contributor

Liquefied petroleum gas (LPG) has been used for decades to power vehicles in developed countries, but drivers or passengers have raised no major health issues about the fuel.

In the Philippines, an increasing number of motorists—mostly drivers and passengers of taxis running on LPG —have complained of respiratory-related distress.

Automotive and fuel experts maintain that LPG, by itself, is a clean and safe fuel.

But a Pandora’s Box of problems arises when ignorance, motivated by the desire for increased profits, becomes the blueprint for the devil-may-care installation of auto LPG systems. Combine that with poor vehicle maintenance, and you get a highly dangerous situation.

These practices have caused leaks in LPG tanks and seepage into the passenger cabins, causing riders to suffer the classic symptoms of LPG inhalation, he said.

Ironically, it was Loinaz who was the first to apply for an auto LPG retail business in 1977 with the Oil Industry Commission. He was also responsible for the formulation of the Philippine National Standards for Auto LPG in 1983.

The lack of strict enforcement of the standards, however, has allowed the proliferation of numerous “fly-by-night” auto LPG installation outfits, he lamented.

These unauthorized LPG installers commit a virtual combo of haphazard fittings and use inappropriate materials, all to make a quick profit, Loinaz observed.

A few of these dangerous fittings and materials that Loinaz took pictures of include:

Filler valve placed inside the trunk, or near electrical wires and bulbs.

The LPG refueling receptacle requiring an adaptor, which is considered a safety hazard.

Adding to an already volatile situation, he said, would be the dangerous habit of many taxi drivers to “force-feed” their LPG tanks in order to lessen trips to the pumps.

Loinaz showed to the Inquirer pictures he took of taxis force-filling their fuel tanks to more than the recommended maximum safe limit of 80 percent tank capacity. Sometimes, drivers would order the pump boys to fill the tanks to 100 percent capacity, exponentially increasing the risk of seals, gauges and fittings on the tank to burst and leak fuel.

One member of the technical group of the Department of Energy, who refused to be identified for lack of authority to speak for the DOE, disclosed that when the group once conducted gas analyses on several taxis, it discovered high amounts of hydrocarbon emissions, which meant poor combustion even if they were LPG-powered.

The DOE source added that when the government decided to start the auto LPG program and updated and deliberated on the existing auto LPG standard in 2006, the energy department already saw the potential problems caused by these “fly-by-night” auto LPG installers.

The source admitted the existence of these unlicensed converter/installation shops, adding that this would be in direct violation of the Department of Trade and Industry’s Bureau of Product Standards for licensing before LPG conversion and retrofitting.

The DTI has a list of licensed converter shops. The role of the DOE, the source said, has been to go on an information and education campaign and conduct seminar workshops on proper LPG installation, particularly in many key cities like Davao, Cebu and Cagayan de Oro.

Fregil stressed that the reason LPG fuel leaks into passenger cabins would be the improper installation of tanks and poor LPG maintenance servicing.

“The LPG kit also needs to be maintained properly. There are filters that need to be changed so it can perform at its optimum,” she said.

Fregil added: “I have been driving my LPG-powered cars for over six years and I have never experienced symptoms of having dry throat and sickness while driving.”

Auto enthusiast Leslie Sy, who started his research in auto LPG in 2005 and watched the entire process as his Corolla GLi fuel line was converted to LPG use in 2006, said he still uses auto LPG, and there have been no ill effects whatsoever.

Too old on the road

Sy said that he had used a carburetor kit modified with an EFI bypass system. “A couple of years later, we had our other cars converted, including a Toyota Camry Gen2, Honda City 1.3L iDSi, N16 Nissan Sentra 1.3L, Mazda3, and Honda CRV 2.0 Gen2.”

Sy said, however, that accounts of increased respiratory illnesses arising from riding in LPG taxis did not surprise him. “It does surprise me that people did not catch the real cause of the problem,” he added.

Sy traced the root of the LPG problem back to several years ago when the Land Transportation Office tried to boost the auto LPG program among taxi operators.

“They gave the taxi companies two-year extensions for auto LPG-converted taxi cabs. This was on top of the five-year franchise for new cabs and another five-year extension for the same car. So the taxi cab would be 12 years old before it was retired from ‘active service.’”

“Now, consider the number of people using the cab in a single day, in a week, month and a year. Consider the lack of maintenance the taxi cabs get, especially with their aircon systems. Consider we live in a tropical, humid country, with spores and molds floating in the air we breathe. Wouldn’t it be conceivable that in those 12 years of daily service, a taxi cab’s aircon system would have some degree of mold or fungus infestation?”