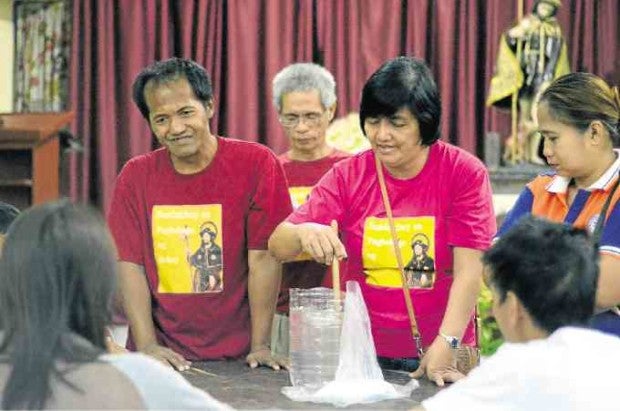 IT TAKES A VILLAGE Barangay officials in Blumentritt show drug dependents how to mix drinks they can sell on the streets instead of “shabu.” —PHOTOS BY ARNOLD ALMACEN

In a hall underneath an elevated church on busy Rizal Avenue in Manila, more than 60 people, mostly men in maroon shirts and flip-flops, sat in rapt attention as the speaker flashed biblical verses on the screen and talked about the “spirituality of work.”

The talk began with a prayer and a Zumba session and segued into two hours of Gospel verses from Proverbs, Thessalonians, Timothy, Peter and Luke, with the speaker warming up to topics about wealth, indolence, industry and stewardship.

It sounded like a parish-organized renewal seminar for the spiritually lost. And in many ways, it is, although it is clearly more than that.

The captive audience were drug surrenderers from around Blumentritt, a populous area in Manila where crystal meth, or “shabu,” is swapped openly like candies at street corners, and the speaker is a staff member from the Catholic Church-run Caritas Manila.

The session—a prelude to a livelihood training project—is part of a community-based drug reformation program.

That morning in late January, the drug users, runners and peddlers trooped back to San Roque de Manila Church parish hall to attend the program, hoping to turn a new leaf as news spread about another drug suspect shot dead the night before. 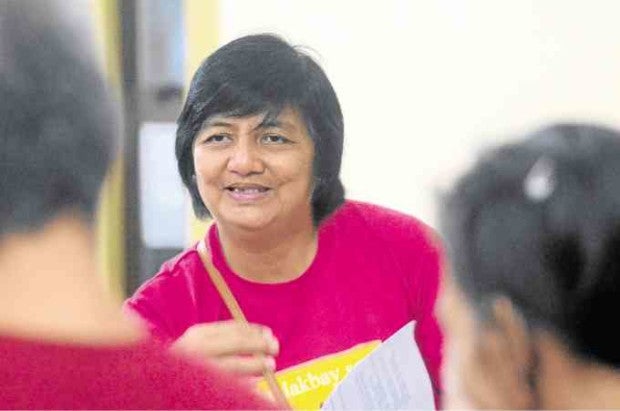 Since September last year, the San Roque Church on the corner of Rizal Avenue and Blumentritt Street has been hosting the drug reformation program once a week in collaboration with the barangays, local police, Parish Pastoral Council, Caritas Manila and volunteers from different institutions.

Long before the Catholic Church decried the “reign of terror” triggered by the Duterte administration’s drug war that has so far claimed more than 7,000 lives, this parish has been quietly providing refuge and a shot at redemption to meth users and peddlers.

Inside the parish hall, shut out from the noise outside—the madding crowd, the incessant honking of jeepneys and the rush of LRT trains—the surrenderers find peace, distraction from their cravings and escape from violence.

In late January, the national police suspended the crackdown on illegal drugs after some antinarcotics agents were found to be using it for extortion.

“I’ve been clean for six months,” said Veronica Sevilla, 44, one of the very few women taking part in the program. 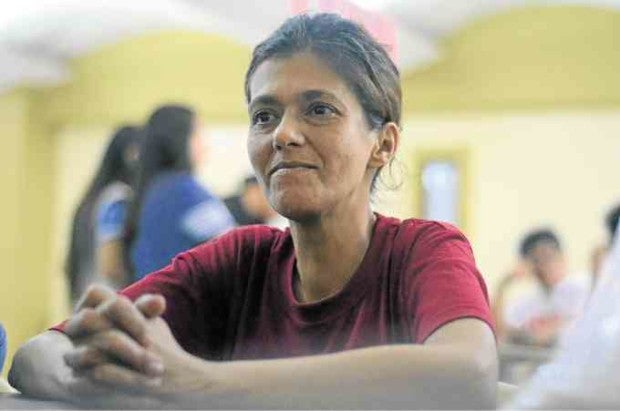 CAPTIVE AUDIENCE Veronica Sevilla listens intently during a drug rehab session inside a church in Blumentritt.

Her partner, Jose Mari Beslig, also in his 40s, with whom she has 2-year-old twins living with her mother in Bataan,  has also joined the program but finds himself struggling with it.  And so she follows him everywhere to make sure he doesn’t suffer a relapse into drug use.

“But things have become easier now,” Sevilla said, acknowledging that the program has somehow put order into their relationship. “We used to bicker a lot when we didn’t have a ‘hit,’” she added.

They’ve come a long way from their drug-crazed days when they would escape into a cheap motel along Rizal Avenue to satisfy their craving, bed bugs notwithstanding, Sevilla said.

Sevilla works as a street sweeper, and Beslig as a watchman in Barangay 377, an area located just behind  Chinese General Hospital, for a small allowance. At night, the couple sleeps on the barangay hall stage, rolling out a mattress on the cold floor. They use a table top upended on its side as makeshift divider for privacy.

It’s an arrangement made possible by barangay chair Victoria Grande, who plucked the couple from the streets and extricated them from drug use.

She also employed them, coaxed them to surrender under “Oplan Tokhang” and enlisted them in the program.  Until they find a more stable job, the arrangement suits them fine, Sevilla said. 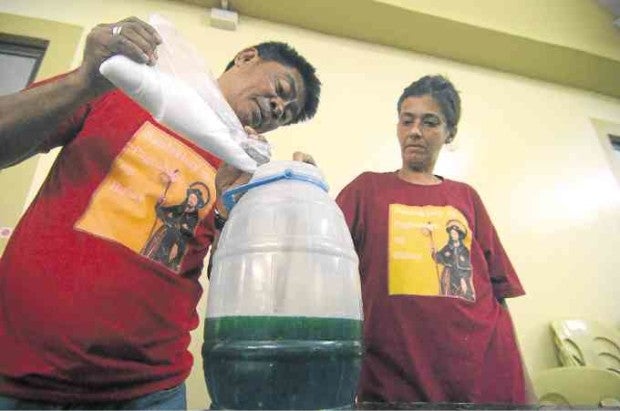 COOL OPTION Sevilla takes note of the right mix in making “sa malamig,” a refreshing drink sold on the streets.

Weeks after last year’s launch of Oplan Tokhang—the government’s operation against illegal drugs that has police knocking on homes—some 300 people from two zones or 20 barangays around Blumentritt turned themselves in to the local police.

“After watching the gory deaths of drug suspects on TV, I told (my partner) Kokoy that I didn’t want to end up like them. I want to grow old, surrounded by family,” Sevilla said of her decision to enlist in the reformation program.

Out of the 300 surrenderers in the community,  less than 100 turned up for the program.  People feared that signing up could lead to a violent death, as had happened to countless others.

But Sevilla saw it as a safe pass from the police. Commanders at the nearby Santa Cruz police station, who often stopped by the parish hall to check on the sessions, had given the assurance that the police would lay off the surrenderers once they complete the program.

The parish reformation program is divided into formation by catechism, values formation, skills and livelihood, and sports, arts and culture.

Heavy on Gospel verses and joyful songs, the sessions ran the whole gamut of self-affirmation exercises: from coming to terms with oneself to reconciling with God; from valuing one’s dignity to valuing the dignity of others and from avoiding temptations to journeying together as a community toward conversion.

“It’s a spiritual formation. It’s important to mold the interior first; the exterior will follow,” said Fr. Robert “Bobby” dela Cruz, 55, an ordained minister of Caritas Manila’s restorative justice ministry who crafted the formation modules from his own experience as a former drug dependent.  “This is like the ICU, after which (the program participants) will be integrated into society.”

But transformation doesn’t happen overnight, Dela Cruz said over the phone.  “Most of the surrenderers turned up for the program on their own and slowly learned to articulate their thoughts and feelings. They became more free and their fear disappeared.”

To complement the formation, volunteers from the Center for Family Ministries (Cefam) and University of Santo Tomas Psychotrauma Clinic also provide counseling for the surrenderers.

“Admittedly, we have addictive tendencies in all aspects of our lives, (but) there’s always hope for change,” said Fr. Teodulo Gonzales, Cefam program director for research and development of new programs, who helped craft with the Psychological Association of the Philippines the program’s modules on psychosocial training for the volunteers.

When the Archdiocese of Manila, under Luis Antonio Cardinal Tagle, launched in October last year its rehabilitation program called Sanlakbay para sa Pagbabagong Buhay (A journey toward conversion), it held up the San Roque parish program as a model.

The long-term goal is for surrenderers to be reintegrated into mainstream society by encouraging them to join a religious community and offering them livelihood, among other options.

There’s no discounting the fear factor, however.

When the Philippine National Police’s crackdown on drugs was ordered suspended following the expose on drug agents’ extortion activities, the number of surrenderers attending the San Roque parish program dwindled:  from a high of 66 in late January, the number shrunk to 25.  The suspension could have offered drug suspects a temporary reprieve from their fear of being randomly killed in dark alleys or inside their hovels before terrified family members.   (The crackdown resumed in late February, this time under the command of the Philippine Drug Enforcement Agency—Ed.)

“Whether that’s good or not, I can’t say,” Dela Cruz said.  “But we will carry on. If (people) stop coming, then we will stop.”