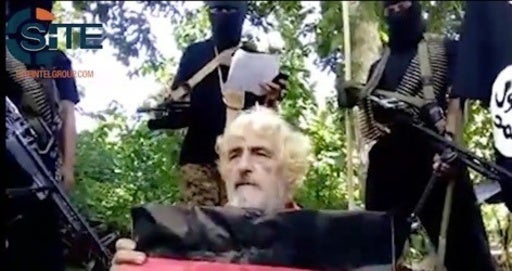 In this undated image made from militant video and released by SITE Intel Group on Feb. 24, 2017, shows German hostage Jurgen Gustav Kantner at an undisclosed location. Abu Sayyaf extremists in the Philippines have released a video of the beheading of Kantner. The brief video circulated Monday, Feb. 27, by the SITE Intelligence Group, which monitors jihadi websites, is the first sign that the brutal militants proceeded with their threat to kill Kantner in the southern Philippines after a Sunday ransom deadline lapsed. (SITE Intel Group via AP)

Professor Octavio Dinampo, who was once also kidnapped, said Kantner’s remains were recovered “between the vicinity of the camps of two leaders of the Moro National Liberation Front (MNLF).”

He said the two camps belonged to Nur Misuari in Sitio Bacud in Kagay village and that of Lupa Sug State Revolutionary Command chair Khaid Adjibon in Sitio Talibang.

The distance between the MNLF camps is about half a kilometer.

Sobejana said Kantner’s remains would be kept at the morgue of the Kuta Heneral Teodulo Bautista Hospital Morgue while documentary requirements were being completed before to transport to Manila.

Kantner’s remains will then be sent home to Germany, he said.

Meanwhile, Sobejana said members of the Scene of the Crime Operatives (SOCO) in Sulu were requested to conduct site preservation for evidence gathering and post mortem procedures.

Kanter was abducted by members of the Abu Sayyaf Group (ASG) from his yacht, the Rockall, in waters off the southern Philippines last year.

The vessel was found drifting last Nov. 7, with the body of Kantner’s female companion, Sabine Merz, inside.

The couple had previously been kidnapped and held for 52 days in Somalia in 2008.

The Armed Forces of the Philippines said that the ASG, tagged as a terrorist organization by the Philippines and the US, still has 31 hostages – 12 Vietnamese, seven Indonesians, six Filipinos, five Malaysians, and one Dutch.  /atm