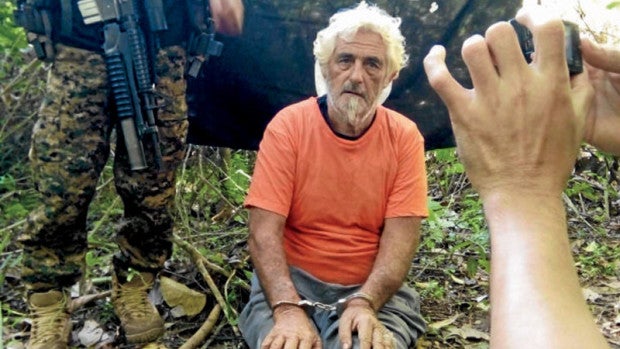 DAVAO CITY – German hostage Jurgen Kantner was silent as the Abu Sayyaf prepares to execute him.

In a one-minute and 43-second video leaked from a chat group, the 70-year old Kantner was initially on the ground, wearing black shirt and a pants and his hands tied to his back.

A bandit then helped him get up while talking in an uncertain dialect with his fellow bandits.

A man with a curved blade, similar to the ones used by sacadas, then emerged and suddenly grabbed Kantner, who only managed to utter: “Now he kill me.”

Kantner was seen in the video struggling for his life as the unidentified bandit slashed his throat back and forth while chants of “Allahu Akbar” fill the background.

The executioner, who wore a full head garb obscuring his face, then held the severed German’s head into the air as the chanting continued.

The executioner then placed the German’s head upside near Kantner’s neck before walking away.

Presidential Adviser on the Peace Process Jesus Dureza condemned the beheading of the German national as he confirmed the execution of the kidnap victim in Sulu.

“We grieve as we strongly condemn the barbaric beheading of yet another kidnap victim,” Dureza said in a statement.

“Up to the last moment, many sectors, including the Armed Forces of the Philippines exhausted all efforts to save his life. We all tried our best. But to no avail,” he added.

Dureza said terrorism has “no place in a country like ours and we as a people must confront violent extremism every time it rears its ugly head.”

“I was always in close contact with German authorities in our efforts. We condole with his family, friends and loved ones,” Dureza said.

Kantner and his wife Sabine Merz were sailing on Malaysian waters when they were kidnapped on November 5 last year. Merz was killed by the bandits.