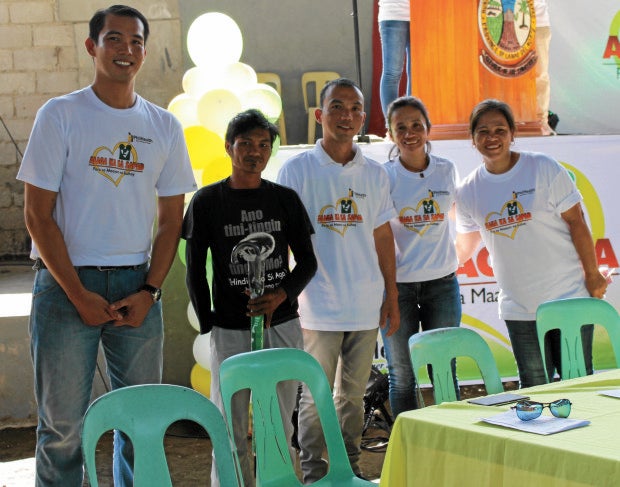 ON HIGH GROUND Dreyfuss Perlas (left, with staff from PhilHealth) actively worked on projects that advanced the health system in the countryside. —Photo courtesy of PhilHealth Iligan

Iloilo City—He had always stood out, and not just because he was 6 feet 3 inches tall.

Dr. Dreyfuss Perlas was a “gentle giant,” recalled the childhood friends and classmates of this Doctor to the Barrios (DTTB) volunteer who was gunned down on Wednesday on his way home in Barangay Kapatagan, Lanao del Norte province.

Perlas, 31, was on his motorbike when an unidentified man shot him at the back. The bullet pierced his heart.

The gunman and the motive for the killing have yet to be identified, police said.

Known for being “good-natured and sweet,” the tallest boy in class also excelled in science and “always had the best science project in class,” said Mechelle Sale, a classmate at Batan Elementary School in Batan town in Aklan province.

He was also a good singer, a tenor, who represented the school in interschool competitions.

“Toto” could have been a basketball player but he moved “awkwardly,” Sale said.

Loved to paint and read

Louella Patricio described her brother as one who loved painting with pastels and would often stay in his room to paint or read.

Classmate Antonette Depedro recalled Perlas as being “good-natured and sweet (who)  shared what he had with us.”  His house was their hangout, she said, “because we were always welcome there.”

Perlas went to the University of the Philippines  (UP) Visayas where he continued to be an academic achiever set on becoming a doctor “so he could make lives better.”

After taking up biology at UP Los Baños in Laguna, he returned to Iloilo City and graduated from the West Visayas State University College of Medicine in 2011 under a Department of Health (DOH) scholarship program.

In medical school, Perlas’ passion for social reforms became apparent when he became group leader for three years in their community service program, said his classmate, Dr. Maris May Pillado.

“He came up with activities to help improve health awareness and practices in the communities we visited,” Pillado said.

Being DOH scholars, Perlas and Pillado became members of Batch 30 of the DTTB program that required them to render two years of government service, usually by being assigned in depressed areas with no doctors.

Perlas chose to be assigned in Sapad town, Lanao del Norte, an assignment he was initially apprehensive about, Sale said, because it was far from his family and hometown. He also had to adjust to the language and culture of the community dominated by Muslims.

Among the first adjustments he had to make was learning to treat female Muslim patients without touching them in line with their religious beliefs and practices.

But Perlas soon grew roots in the community as he immersed himself in his work.  After his DTTB stint, he decided to join the local government unit as a municipal health officer, a decision that surprised the other volunteers.

“We were not required to stay in our place of assignment after our (DTTB) contract,” said Pillado.  “Most of us want to stay close to our families or hometowns, go into further studies or take a break from our tedious assignment. But Drey chose to stay.”

Patricio said the family had repeatedly asked her brother to transfer to other areas because they worried about his safety.

“But he wanted to stay because he had learned to love the community. He said it had no regular doctor for 12 years until he was deployed there,” she added.

Perlas said the people were “kindhearted” and that if he left the town, the projects he had started would be discontinued, among them the renovation of the municipal health center, Sale said.

The doctor tried to calm his family’s anxieties about his safety by coming home once a year,  usually during the Christmas holidays.

He had no definite plans on how long he would stay in Sapad but Perlas told friends he wanted to settle down when he reaches 35.  He also wanted to specialize in neurological surgery.

Alas, a single bullet snuffed out all his dreams.