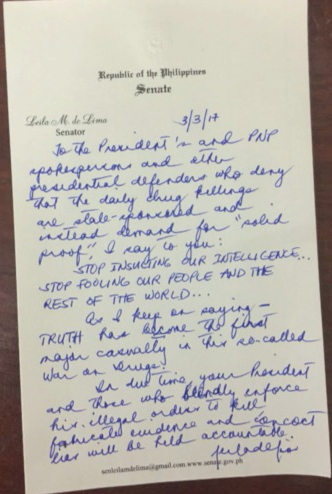 From the Office of Senator Leila de Lima.

Even in detention, Senator Leila de Lima is making her voice heard.

After issuing a handwritten letter to her supporters on Thursday, she sent out another one on Friday. This time it’s for the spokespersons of Malacañang and the Philippine National Police (PNP).

READ: In jail, De Lima vows to fight back

“To the President’s and PNP spokespersons and other presidential defenders who deny that the daily drug killings are state-sponsored and instead demand for ‘solid proof,’ I say to you: Stop insulting our intelligence. Stop fooling our people and the rest of the world,” she said in the one-page letter.

De Lima said that “truth has become the first major casualty in this so-called war on drugs.”

“In due time, your President and those who blindly enforce his illegal orders to kill, fabricate evidence and concoct lies will be held accountable,” she said.

De Lima is currently detained at the Camp Crame Custodial Center for her alleged involvement in the illegal drug trade. RAM