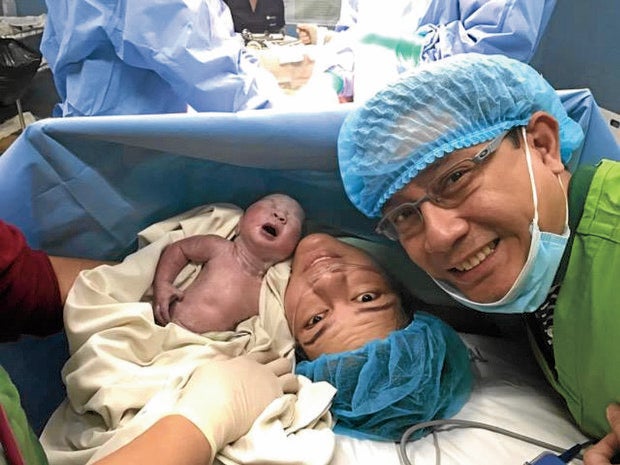 Nicknamed Stonefish, the baby was born via caesarian section at 12:56 p.m. on Thursday in an undisclosed hospital here.

The baby weighed 2.42 kilograms and is healthy.

The mayor has two other children: Mikhaila Maria or Sharky, 8; and Mateo Lucas or Stingray, 4.

Mayor Duterte gave her children such nicknames as she loves the sea so much, says Tupas.

“She’s the mother ocean,” he added.

Duterte and her family were not disclosing the name of the hospital as they wanted to have privacy, Tupas said.

When the mayor’s pregnancy—through in vitro fertilization—was confirmed in July last year, she said she and her family were expecting triplets and that she was taking a three-week leave from work.

A few weeks later, she announced—and her doctor confirmed—the loss of two of the triplets she was carrying./rga

Read Next
All of a sudden, Duterte’s mouthpiece turns media-shy
EDITORS' PICK
A delightful blessing!
Gov’t plans to open COVID-19 vaccination for 5- to 11-yr-olds by January 2022
Gov’t eyeing COVID-19 vaccine booster for essential workers, indigents by Dec. 10
Villar Group gears up for AllValue Shopping Party on Dec. 3; around P 1-million promos and discounts up for grabs
Omicron variant detected in more countries as scientists race to find answers
Legarda: Ending Violence Against Women, a cause for all
MOST READ
Omicron poses ‘very high’ global risk, countries must prepare–WHO
Quiboloy warns of ‘much worse than Omicron virus’ if his ‘persecution’ is not stopped
Bongbong Marcos’ conviction in tax case not a crime involving moral turpitude — lawyer
Marcoleta defends pol ads on ABS-CBN
Don't miss out on the latest news and information.