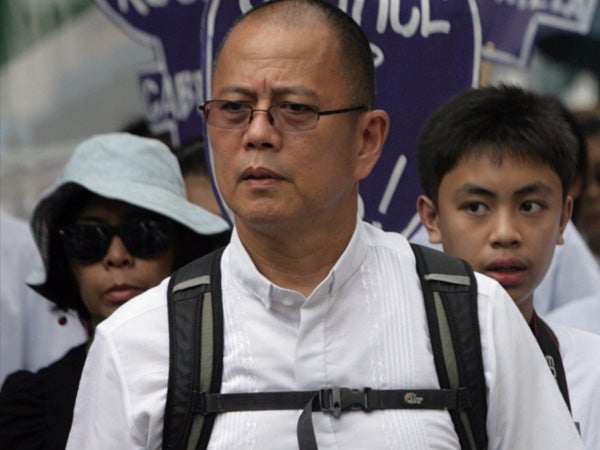 Activist priest Fr. Robert Reyes has a piece of advice for President Duterte: Stop making noises and repent from your sins.

Reyes gave this advice to the President before visiting his close friend Sen. Leila de Lima at the Philippine National Police’s Custodial Center on Wednesday.

Reyes is currently holding a mass to mark Ash Wednesday, the start of 40-day Lenten season, inside De Lima’s cell where the senator has stayed since her arrest for illegal drug charges.

De Lima, former chief of the Department of Justice and Commission on Human Rights, is President Duterte’s staunchest critic, slamming Duterte for endorsing drug killings in the country.

Reyes accompanied De Lima from the time she was holed up in the Senate until she surrendered to the police and was brought to Camp Crame last Friday.

Aside from the priest, De Lima’s staff and family members visited and joined them for the mass. ASU

Read Next
Cayetano urges public to back resumption of war on drugs
EDITORS' PICK
‘FPJ’s Ang Probinsyano’ officially ends after nearly 7 years
Red-tagged green activist recalls imprisonment
House energy committee chair Arroyo bats for cheap electricity
Authors unbowed after gov’t ‘purge’ of books
Powered by style, innovation and passion
A laptop that maximizes your WiFi so you can maximize your productivity
MOST READ
Arjo Atayde reveals proposal to Maine Mendoza was ‘more than a year’ in the making
‘FPJ’s Ang Probinsyano’ officially ends after nearly 7 years
Pagasa: Cloudy Saturday with possible rain showers; LPA spotted outside PAR
Angelica Panganiban, Camille Prats recall ‘trauma’ of being called out for weight gain in ‘G-mik’
Don't miss out on the latest news and information.