Cayetano urges public to back resumption of war on drugs 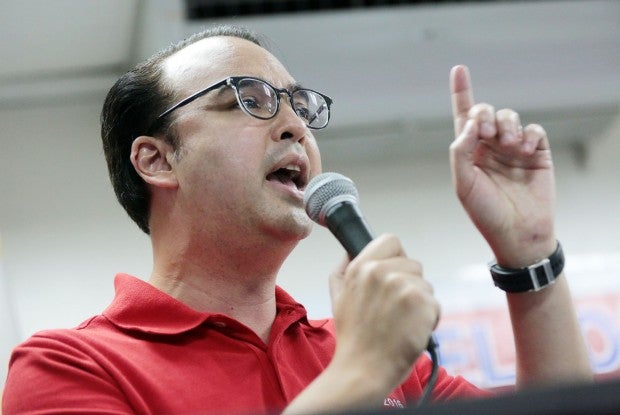 Sen. Alan Peter Cayetano, a staunch ally of President Rodrigo Duterte, has called on the public to support the possible resumption of the government’s war on drugs after it was ordered suspended last month.

“It should now be our people’s war against drugs, not just President Duterte’s drug war, because it is our fight for our families’ safety, rights and values. We thank the President for reiterating his commitment to ending our country’s perennial problem on illegal drugs,” Cayetano said in a statement.

“A successful anti-drug campaign will mean fewer crimes and more peaceful communities, with our families as the biggest gainers in the process. This is our people’s war on drugs, our fight for the right of every family to a peaceful and safe community, to uphold the right of every peace-loving Filipino to be protected,” he added.

Cayetano also called on “professional and decent” law enforcers to continue to be vigilant to prevent rogue cops from pursuing their criminal activities in the guise of the war on drugs.

Duterte on Tuesday said he would have to call some of the police back to his war on drugs. He said he would leave it to the PNP whether to resume its “Oplan Tokhang.”

PNP chief Dir. Gen. Ronald “Bato” Dela Rosa earlier said the police force was ready to resume its antidrug operations following reports that drug perpetrators were supposedly back on the streets during the campaign’s suspension.

Duterte suspended the war on drugs in January at the height of controversy surrounding the murder of South Korean businessman Jee Ick-joo inside police headquarters in Camp Crame. JE

PNP: War on drugs suspended, purge of bad cops on