‘Help me find my fiancé’s killer’ 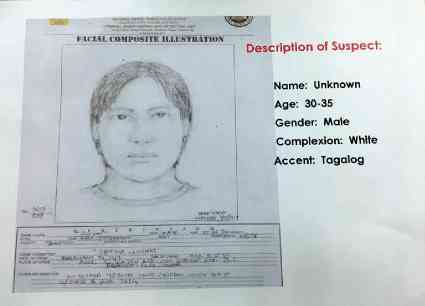 The fiancée of the motorcycle driver who was shot dead in a road rage incident over the weekend appealed to the public on Monday to help her find the killer.

Anthony Mendoza, a 27-year-old information technology professional, was supposed to get married next year to Marian Reginaldo, his girlfriend of 13 years.

Reginaldo immediately flew back to Manila from Singapore where she was based when she learned of her fiancé’s death.

“He didn’t deserve this. He was kind and didn’t pick on anyone,” she said, adding that whatever happened during the traffic altercation was not reason enough for the suspect to kill Mendoza.

“We were almost about to fulfill our dreams and then this. He was my life. I don’t know where to start that’s why I’m asking for everyone’s help,” she said.

Based on the description given by witnesses, the Quezon City Police District (QCPD) on Monday released a sketch of the Toyota Land Cruiser driver who shot Mendoza in the head.

Chief Supt. Guillermo Lorenzo Eleazar, QCPD head, also promised the victim’s family that they would get the suspect believed to be between 35 and 45 years old (not 40 as earlier reported).

A discrepancy between witnesses’ accounts and the Land Transportation Office (LTO) records, however, has prevented authorities from identifying the sport utility vehicle (SUV) driver.

According to Mendoza’s brother, Michael, who was with the victim when he was killed, the SUV’s license plate was AHA 3454. However, LTO records showed that the plate was registered to a Toyota Avanza.

This has prompted the police to examine more footage taken by closed-circuit television cameras in the area to verify the SUV’s license plate.

Mendoza was shot in the head at the corner of D. Tuazon and Quezon Avenue in Quezon City at 3:15 p.m. on Saturday. This was after he got into an argument with the SUV driver who nearly hit his motorcycle.

Read Next
Concrete wall collapses, crushes teen playing basketball in Marikina City
EDITORS' PICK
Smart three-peats as country’s fastest mobile network – Ookla
Would the military allow me to stay this long if I’m inutile? – Duterte
In good spirits: SMDC helps farmers and residents through Kadiwa Market
Pre-order the new vivo Y20s [G] to get a free TWS earphone
65% of Filipinos say Duterte’s health should be made public – SWS
DSWD chief admits ‘slow start’ in distribution of aid in ‘NCR Plus’
MOST READ
Vico Sotto frets getting photos of ‘butt vaccination’ from Pasig dwellers
Metro Manila to have shortened curfew hours from 8 p.m. to 5 a.m. under MECQ
San Miguel Corp. continues to invest heavily in the Philippines’ future
COVID-hit Roque slams ‘un-Christian’ query on how fast he secured hospital bed
Don't miss out on the latest news and information.