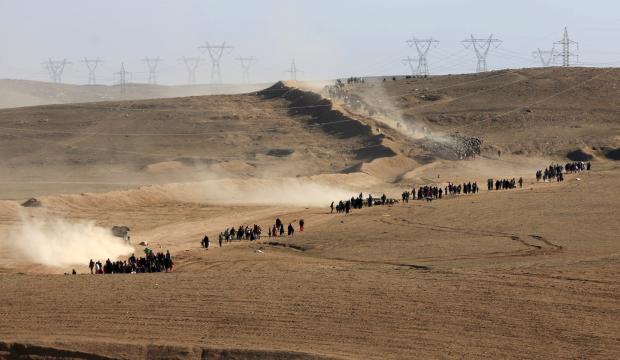 Displaced Iraqis flee their homes due to fighting between Iraqi security forces and Islamic State militants, on the western side of Mosul, Iraq, Saturday, Feb. 25. 2017. (Photo by KHALID MOHAMMED/AP)

BAGHDAD — Iraqi militarized police captured two neighborhoods on the western side of Mosul on Sunday amid fierce clashes with Islamic State militants, as thousands of people continued to flee the battle to government-controlled areas, security officials said.

Iraqi forces, backed by aerial support by the US-led international coalition, launched a new push last week to drive IS militants from Mosul’s west, capturing so far the city’s international airport and an adjacent military base. Iraqi authorities declared Mosul’s eastern half “fully liberated” from the Sunni militants in January, three months after launching the operation to take back Iraq’s second-largest city.

At dawn Sunday, the Federal Police Commandos Division moved into the Tayaran neighborhood amid fierce clashes, Maj. Gen. Haider al-Maturi told The Associated Press from Baghdad. Al-Maturi said the neighborhood “is now under their full control.”

Al-Maturi said IS militants deployed at least 10 suicide car bombs, but nine of them were blown up before reaching their targets. The 10th killed two policemen and wounded five. Al-Maturi added that his forces arrested two militants — an Iraqi and a foreigner who speaks Russian.

Further west, Iraqi special forces captured the Mamun neighborhood by early Sunday afternoon, Brig. Gen. Haider Fadhil of the special forces said. Fadhil said IS militants attacked the advancing troops with more than 15 suicide car bombs, but all were blown up before hitting the troops.

“The neighborhood is fully liberated,” he said. “We are clearing it up and beefing up fortifications.”

Up to 3,000 people fled from the Mamun neighborhood Sunday morning, according to Iraqi special forces Brig. Gen. Salam Hashed, who oversees a screening center south of Mosul. Hashed said just over 2,500 people fled the previous day.

According to the UN figures, about 750,000 civilians are believed to be trapped in their houses in western Mosul, one of several challenges expected to slow the advance of the Iraqi troops. Another complication is western Mosul’s old and narrow streets, which will force Iraqi soldiers to leave the relative safety of their armored vehicles.

Western Mosul is the last significant urban area IS holds in Iraq. The city is split roughly in half by the Tigris River.

Mosul fell to IS in the summer of 2014, along with large swaths of northern and western Iraq. –Qassim Abdul-Zahra and Susannah George