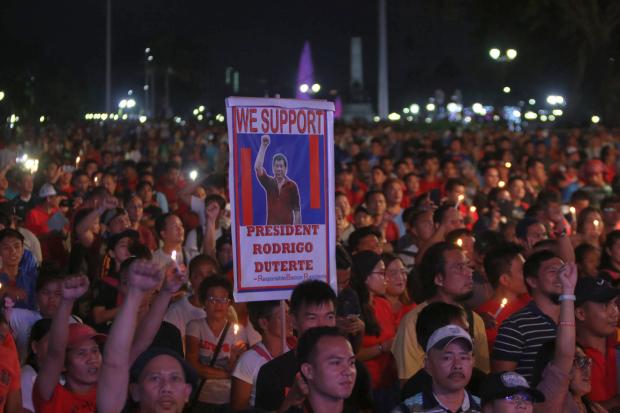 “Who do you want to jail next?”

Justice Secretary Vitaliano Aguirre II posed this question to thousands of supporters of President Rodrigo Duterte supporters who had gathered at the Quirino Grandstand at the Luneta in Manila on Saturday night.

“You were saying who you want to jail next? Who?” Aguirre asked the crowd in Filipino.

The throng shouted back: “Trillanes!”.

They were refeerring to Sen. Antonio Trillanes IV, one of the President’s fiercest critics.

Aguirre was one of several government officials spotted at the pro-Duterte rally, which is expected to last until Sunday morning.

In response to the crowd’s reply, the smiling justice secretary said: “Okay, help me out then.”

Aguirre added: “Your presence here is a measure of your constant support for our President.”

The justice secretary’s question of who should be jailed next was a dig at the arrest and detention of Sen. Leila de Lima the day before on drug charges filed a the Muntinlupa Regional Trial Court.

De Lima has been critical of Duterte and his alleged links to the Davao Death Squad, while Trillanes has repeatedly brought up the issue of the President’s wealth in his bank accounts.

At the same venue, Social Welfare Undersecretary Virginia Orogo urged the defeated candidates in the 2016 elections to put aside their differences and cooperate with the Duterte administration.

She also appealed to Filipinos to give peace a chance.

“The defeated candidates in the elections, we hope that they just accept it and cooperate for the nation’s progress,” she told reporters in a news briefing.

She added: “Our President is willing to listen. Why should we always go to the streets to protest? Let’s talk first.”

Orogo maintained that the rally was the people’s call for the country to unite and give peace a chance under the Duterte administration.

Several officials of the Duterte administration turned up at the rally, which organizers claimed had 800,000 attendees as of 9 p.m.

On the other hand, the police crowd estimate was at 215,000, according to Supt. Emerey Abating of the Ermita Police Station.

For her part, Padilla said Saturday night’s rally was the essence of change, 31 years after the EDSA People Power Revolution.

“This is the essence of change,” she said. “Let us support the fight of our President against drugs, corruption and poverty.”

For Tejano, it did not matter to him if the crowd was composed of only 10 or 20 supporters, as long as they represented genuine voice of the people.

“What is important to us is that we bring out the real voice of the masses,” he said. “Let us not allow the President to fight drugs alone. This is just the beginning. The real force will be felt on Sunday.” /atm