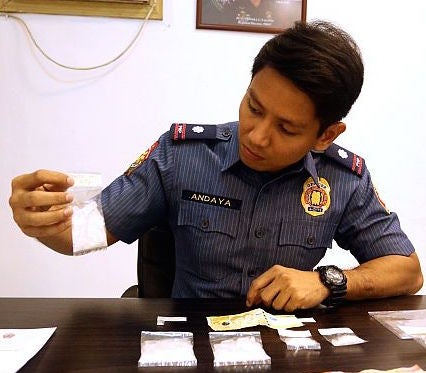 CAGAYAN DE ORO CITY – A suspected drug courier is now facing charges for alleged possession of illegal drugs estimated to be worth P500,000 after he was arrested by agents of the Philippine Drug Enforcement Agency (PDEA) at the seaport in Barangay Macabalan here Monday night.

PDEA said its K9 unit was conducting a random check at the port where the suspect was caught.

PDEA agent Ben Kalibre said Montejo acted suspiciously when he was about to pass the x-ray machine.

Kalibre said the suspect refused to be subjected to a pat-down by PDEA agents. He added Montejo also tested positive for illegal drug use.

He said the illegal substance was intended to be delivered to Cebu City and came from Lanao.

Kalibre said the suspect was not on PDEA-10’s narco-list but he added Montejo may have been involved in the drug trade in the region.

The suspect told PDEA he only acted as transporter of the illegal item to Cebu.

He said the agency has charged the suspect with violation of provisions of RA 9165, especially on transportation and illegal possession of illegal drugs.  SFM