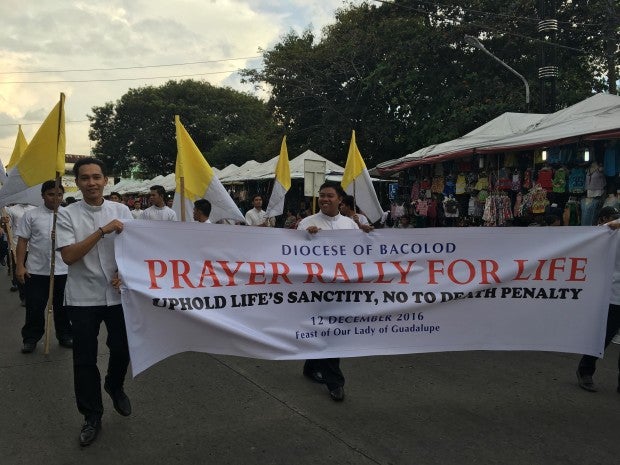 Bacolod City Catholics hold a prayer rally on the reimposition of the death penalty, on Dec. 12, 2016 (PHOTO BY CARLA P. GOMEZ/ INQUIRER VISAYAS)

ILOILO CITY — The Catholic Church and human rights advocates on Panay and Negros Islands have stepped up their campaign against the restoration of the death penalty and against extra-judicial killings (EJK).

In Bacolod City, the Diocese of Bacolod placed giant tarpaulins in front of the San Sebastian Cathedral, expressing its vehement opposition to the revival of capital punishment.

In Panay, parishes and lay organizations under the Jaro Archdiocese will hold caravans in Iloilo and Guimaras provinces on Friday to call for the rejection of the death penalty bill pending in Congress and an end to extra-judicial killings related to the government’s massive campaign against illegal drugs.

The caravans are expected to be joined by priests and lay people.

The staff of the Jasac has called on legislators representing Iloilo and Guimaras provinces to vote against the bill seeking to reimpose the death penalty.

In separate but identical letters to the legislators, the social action arm of the Jaro Archdiocese also challenged the legislators to speak out against extra-judicial killings.

“As our voice and representative in Congress, can we expect to hear you condemn in the strongest possible words the evil of EJK and argue intelligently about our vehement opposition to the reimposition of the death penalty,” read the Jasac letter signed by Oso and 30 staff members.

They cited the 7,000 deaths attributed to the massive anti-drug campaign in the past seven months by the Duterte administration. These include suspected drug personalities killed in police operations and those gunned down by unidentified persons.

They stressed that the drug menace would not be solved without addressing the root causes of the illegal drug menace.

“The deep root of the drug problem and criminality is the poverty of the majority, the destruction of the family, and corruption in society,” they said, quoting from the statement of the Catholic Bishops Conference of the Philippines.

Most of the participants in a community-based dialogue on the restoration of the death penalty, organized by the Commission on Human Rights (CHR), in Talisay City, Negros Occidental, expressed their opposition to its revival, CHR provincial chief Romeo Baldevarona said.

Only the representatives of the Muslim community supported its restoration, Baldevarona said.

In a statement, the Pax Christi Institute in Bacolod City strongly rejected the re-imposition of the death penalty, noting the absence of guarantees against wrongful convictions and the miscarriage of justice in the current justice system of the country.

“There is no clear evidence that the death penalty has a deterrent effect on crimes,”it added.

“As the Philippine Congress deliberates on the passage of the bill to bring back the death penalty, let us pray for Divine guidance and the grace of the Holy Spirit to shine upon our lawmakers,” the Pax Christi
Institute said.

Baldevarona said all the outputs from the dialog would be collated, for submission to the Commission on Human Rights central office, and forwarded to the House of Representatives.

In an imperfect justice system, the Pax Christi Institute said: “It is always the poor that suffers the brunt of a failed justice, and with the re-imposition of the death penalty, they will again be the likely victims of this law”.

David Bermudo, CHR Western Visayas director, said they would always
support the pursuit of justice for the victims of crime, but could
never endorse death penalty as punishment.

Based on statistics provided by the Philippine National Police, Bermudo said even heinous crimes, including murder and homicide, were decreasing.

The “institutional stand” of CHR, a government office, contradicts the stand of President Duterte, who is pushing for the death penalty restoration, according to activists against the death penalty.

With CHR being an independent constitutional office, Bermudo said the “worst thing that can happen to us is we will not work our mandate”.

Even in the legislative branch of the government, members have been divided on the restoration of death penalty, he said.  SFM