Women have right to go topless in public — judge 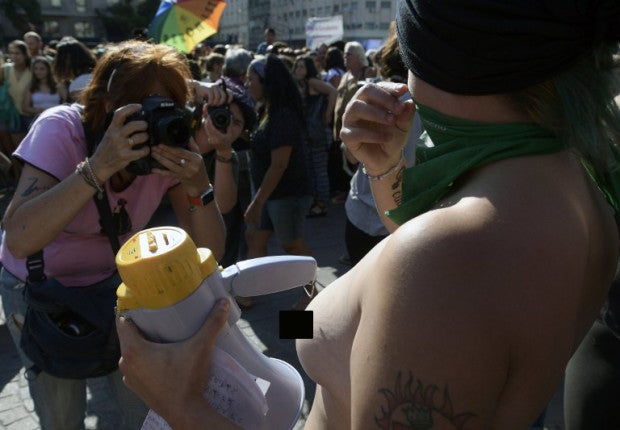 A woman covers her face as she is pictured during a topless demo at the Republic square in Buenos Aires on Feb. 7, 2017. Hundreds of Argentinian women demonstrated topless by the Obelisk of Buenos Aires after topless was prohibited at a seaside resort south of the capital. In the US, a Colorado judge blocked an ordinance that bans women from going topless and showing their nipples in public. AFP

U.S. District Judge R. Brooke Jackson said Tuesday that Fort Collins’ ordinance is based on gender discrimination and issued an injunction against its enforcement.

Fort Collins’ indecency code makes it a crime for women but not men to show their nipples.

Jackson accused city council members of falling prey to discriminatory thinking when they voted unanimously in 2015 to keep a law that prohibits the display of female breasts, rejecting a growing movement to remove gender-specific indecency codes.

“The naked female breast is seen as disorderly or dangerous because society, from Renaissance paintings to Victoria’s Secret commercials, has conflated female breasts with genitalia and stereotyped them as such,” Jackson wrote.

“The irony is that by forcing women to cover up their bodies, society has made naked women’s breasts something to see.”

The hometown of Colorado State University had no cases on record of women being charged with the crime of going topless.

And the city did make an exception for nursing mothers.

But otherwise it was a $250 fine for a woman over the age of 10 in Fort Collins to display her breast “below the top of the nipple.”

Two women sued over the Fort Collins topless ban. Other cities in Colorado, including Denver, have no gender-specific indecency laws.

“My clients take a position that any statute with the words ‘Women are prohibited from.’ is unconstitutional, and I agree with them. Apparently so does a federal judge,” Lane said in a statement Tuesday. CBB