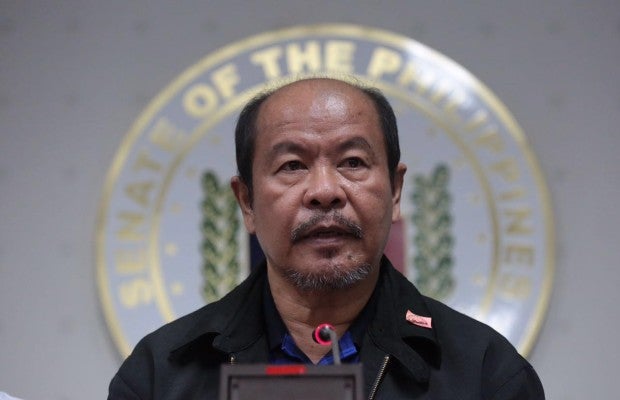 SPO3 Arturo Lascañas faces the media and admits the existence of the Davao death squad during a press conference at the senate on Monday, February 20, 2017. Inquirer/Grig C. Montegrande

An international human rights group has renewed calls for an independent probe into the spate of drug-related killings in the country, following the public admission of confessed Davao Death Squad (DDS) leader and retired policeman SPO3 Arturo Lascañas that then mayor Rodrigo Duterte ordered vigilante killings in the city.

“The allegations by former police officer Arturo Lascañas—that President Rodrigo Duterte, when mayor of Davao City, ordered the killing of several people—heighten the urgent need for an independent United Nations (UN) investigation into more than 7,000 people in Duterte’s ‘war on drugs’ to uncover ultimate responsibility for those crimes,” said Phelim Kine, Human Rights Watch deputy director for Asia, in a statement on Monday.

“The disclosures also suggest possible motivations for the Duterte administration’s moves to launch a politically motivated prosecution of Senator Leila de Lima, who as chair of the Commission on Human Rights in 2009 launched the only official investigation into the Davao Death Squad killings,” Kine added.

Retracting his previous testimony in the Senate, Lascañas resurfaced on Monday and affirmed the existence of the infamous DDS. He claimed that Duterte paid him and other hitman up to P100,000 for every killing, including the death of Davao radio broadcaster Jun Pala and the bombing of a Muslim mosque.

Lascañas also admitted being instrumental in the killing of his own brothers, who were supposedly involved in illegal drugs, due to his “loyalty” to then mayor Duterte.

Kine also called on the government to drop the drug-related charges against Sen. De Lima, who earlier presented to the Senate another confessed DDS member Edgar Matobato.

“The authorities should immediately drop all charges against Senator de Lima, cease their harassment of her and cooperate fully with a UN probe,” Kine said.

De Lima is facing nonbailable drug charges filed by the Department of Justice for violation of the Dangerous Drugs Acts for her alleged involvement in the Bilibid drug trade. She had repeatedly dismissed the charges as false and railroaded.

Following Monday’s raffle, records of the charges will be forwarded to the courts to determine if there is probable cause to issue an arrest warrant against De Lima. IDL