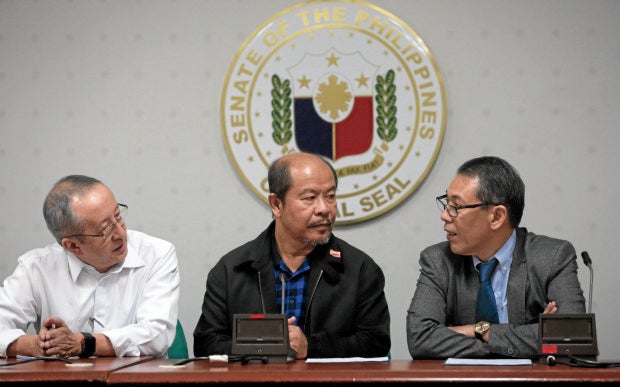 Lawyers Arno Sanidad (left) and Jose Diokno (right) of the Free Legal Assistance Group are now the lawyers of
retired SPO3 Arturo Lascañas who has admitted leading the Davao Death Squad that carried out the murders of criminal suspects on the orders of then Davao City mayor and now President Rodrigo Duterte.
INQUIRER PHOTO / GRIG C. MONTEGRANDE

MANILA — That veteran human rights lawyers stood by Senior Police Officer 3 Arturo Lascañas should be enough reason for the people to take a second look at the policeman’s statements, despite his earlier denial of being part of the Davao Death Squad (DDS), an opposition lawmaker said on Monday.

Akbayan Partylist Rep. Tom Villarin took note of the pedigree of lawyers Jose Manuel Diokno and Arno Sanidad of the Free Legal Assistance Group (FLAG), who have agreed to become counsels of Lascañas.

“The veteran lawyers of FLAG did vet his statements and are sure about his testimony,” Villarin said.

The lawmaker also believes that it was Lascañas’ “conscience” that made him recant his earlier statements at a Senate investigation that he was not part of the DDS and that the group did not exist.

“The revelations of SPO3 Lascañas are damning to President Duterte. Lascañas should be given a chance to reveal under oath in a proper forum like a Senate hearing all he knows about the Davao Death Squad and the role of erstwhile Mayor Duterte,” Villarin said.

He added in a statement:

“The public has the right to know and ask for the truth to come out. We are living in an environment of violence and culture of impunity and we have to make sense of what’s happening to our country. We are in extraordinary times and we should be steadfast in our search for truth and justice.”

In a separate statement, the civil society group Black and White Movement commended FLAG “for living up to its founding traditions.”

“By placing the legal profession at the service of accountability and justice, it has put the law on the side of seeking justice instead of political or personal gain,” the group said.

Black and White also called for a “thorough investigation” into the revelations of Lascañas.

The group said both Lascañas and the first witness, Edgar Matobato, have nothing to gain from going against President Duterte.

“As these witnesses seek redemption, so too should all Filipinos of goodwill pause, reflect, and judge on the crimes committed – and in whose name they were done… The time is past when our countrymen can avert their eyes from these damning facts,” the group said.  SFM