A retired police officer on Monday disclosed that President Duterte, when he was the mayor of Davao City, ordered and paid him and other members of a death squad to kill criminals and opponents.

Human rights lawyers who presented retired SPO3 Arthur Lascañas to reporters during a news conference in the Senate said his disclosures could be grounds for impeaching Mr. Duterte.

Saying he was ending his “blind obedience and loyalty” to Mr. Duterte, Lascañas said it was the then mayor of Davao City who ordered the murder of radio host Juan Pala Jr. on Sept. 6, 2003.

He said then Mayor Duterte paid him and his group P3 million to kill Pala.

“This is the whole truth about the Pala murder case. Now this is considered solved. I am one of those who killed Jun Pala,” he said.

Lascañas’ comments differed from those he made last October at a Senate hearing into extrajudicial killings. At the time, he denied the existence of the so-called Davao Death Squad (DDS).

His account on Monday was similar to that of confessed hit man Edgar Matobato, who testified in the same Senate inquiry to personally watching Mr. Duterte shoot a man dead with an Uzi machine pistol and give orders for police to kill suspected criminals.

Matobato testified that Lascañas was the leader of the DDS, which was composed of policemen, militiamen and former communist rebels.

Human rights groups have documented some 1,400 suspicious killings in Davao City since the early 1990s and critics say the bloody war on drugs that Mr. Duterte has unleashed since taking office seven months ago bears the hallmarks of DDS attacks.

More than 7,700 people have been killed in the nationwide crackdown on illegal drugs, some 2,500 in what police say are shootouts during raids and sting operations.

Many of the killings are under investigation and attributed by the authorities to vigilantes and drug gangs covering their tracks.

Activists, however, say many have been extrajudicial killings.

“Of all the killings we did in Davao City, either we bury them or throw them into the sea, it is paid [for] by Mayor Rody Duterte,” Lascañas, 56, told the news conference in the Senate on Monday.

Breaking into tears at one point, Lascañas said he was speaking up because he was bothered by his conscience, including his role in the deaths of his two brothers, whom he ordered killed because they were drug users.

“I had my own two brothers killed. Even if I end up dead, I’m content because I’ve fulfilled my promise to the Lord to make a public confession,” he said.

Senators Leila de Lima and Antonio Trillanes IV called for a Senate inquiry into the public confession of Lascañas, whose lawyers from the Free Legal Assistance Group (FLAG) gave assurance that the former policeman was ready to face a Senate inquiry and the proper government body.

It was Trillanes who presented Lascañas at Monday’s news conference. 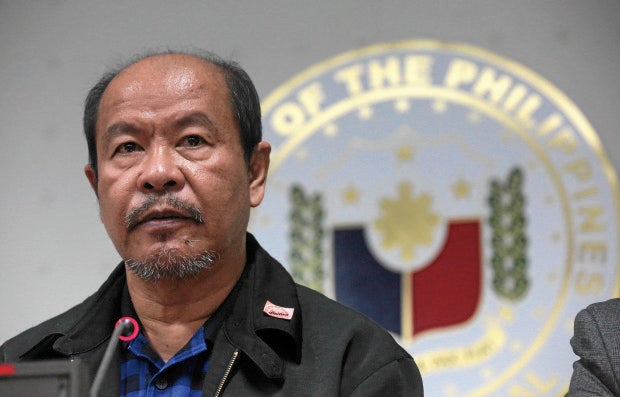 Retired SPO3 Arturo Lascañas appears before the media and admitted the existence of the Davao Death Squad at a press conference at the Senate on Monday, February 20, 2017. INQUIRER PHOTO / GRIG C. MONTEGRANDE

Lascañas narrated several killings that he said Mr. Duterte had ordered, permitted or financed as mayor of Davao City, including the 1993 bombing of mosques as retaliation after Moro rebels were blamed for the bombing of a Roman Catholic cathedral.

Lascañas said he and his group shot dead a kidnapping suspect along with the man’s pregnant wife, young son, father-in-law and two others with the consent of Mr. Duterte.

After his group informed Mr. Duterte about the capture of the suspected mastermind of a kidnapping in Davao, Lascañas quoted the mayor as saying: “All right, make it clean.”

Another target was radio commentator Pala, who was critical of Mr. Duterte. He was killed in an ambush on Sept. 6, 2003, by the liquidation squad’s members, who then got financial rewards from the mayor, Lascañas said.

Lascañas said the mayor wanted Pala killed because the broadcaster attacked him on his radio program every day.

He said Mr. Duterte hired him through the mayor’s driver, SPO4 Sonny Buenaventura, for P3 million to kill Pala.

He said it was Trosio who tipped off the squad to Pala’s whereabouts one night and the hit men were able to kill the broadcaster.