Thousands in Barcelona urge Spain to take in more refugees 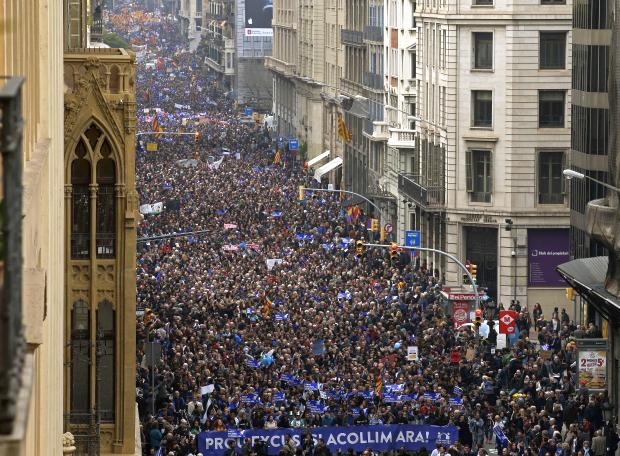 Thousands of people march to demand Spain’s government to increase its efforts to take in refugees who have fled the war in Syria and other violent conflicts in Barcelona, Spain, Saturday, Feb. 18, 2017. Spain has taken in just 1,100 refugees of the over 17,000 it has pledged to accept. Banner reads in Catalan: “Enough Excuses! Take Them In Now!.” (Photo by MANU FERNANDEZ/AP)

BARCELONA, Spain — Thousands of protesters are marching in Barcelona to demand that Spain’s conservative-led government increase efforts to take in more refugees who have fled the war in Syria and other violent conflicts.

Marchers on Saturday held a large banner and small signs with the slogan “Enough Excuses! Take Them In Now!” as they made their way through the city center.

A group of 66 refugees – 65 Syrians and one Iraqi – who arrived in Madrid on Thursday raised the total number of refugees Spain has taken in to 1,100. –Joseph Wilson