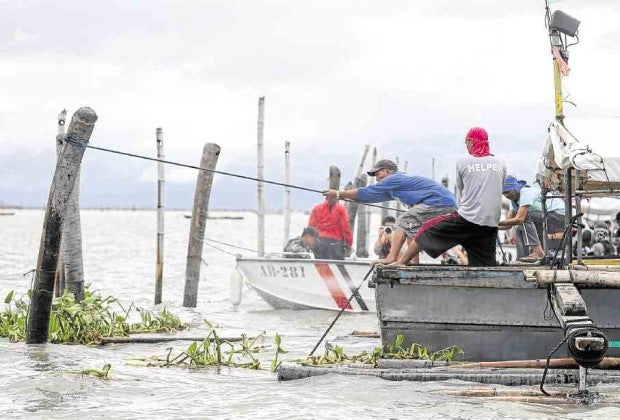 Demolition teams go to work in the freshwater lake in this Jan. 26 file photo.

As environment officials dismantle fish pens and cages in Laguna de Bay to carry out one of the first marching orders of President Duterte, a fisherfolk organization is asking the government: What alternatives are you giving us?

The Alyansa ng mga Pederasyong Kumikilos sa Lawa ng Laguna posed the question as it called for the suspension of the moratorium on aquaculture being imposed by the Laguna Lake Development Authority (LLDA).

The group questioned LLDA Board Resolution No. 518, which set off the dismantling of fish pens based on a directive the President made as early as July last year, in his first State of the Nation Address.

For the alliance, it was “a blanket order” that covered even small fish cages as well as structures for kangkong (water spinach) farms.
“The resolution says that no structure will be left standing and all activities would have to cease for one year,” the group’s spokesperson, Teofilo Mamplata, said in a press briefing in Quezon City on Friday.

Mamplata stressed that the government failed to clarify the processes behind the demolition of the lake structures. “They started without considering the families who rely on the lake for food and livelihood.”

According to the alliance, around 24,000 small-time fishermen will be affected if all fish pens in the freshwater lake are removed.

The group called for a review of the LLDA resolution and urged the agency and the Department of Environment and Natural Resources (DENR) to speak with the fisherfolk from the provinces bordering the lake.

They also asked Environment Secretary Gina Lopez to define what exactly are the eco-tourism projects being considered in Laguna Lake and surrounding areas.

Lawyer Terry Ridon, chair of the Presidential Commission for the Urban Poor, said they would call an interagency meeting between the two agencies to address the matter.

In an earlier press conference, the DENR gave assurances that the clearing operations would not adversely affect small-time fishermen.