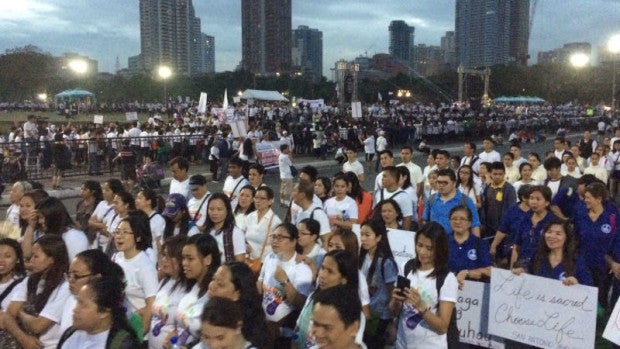 In its first show of force under the Duterte administration, some 10,000 Catholic religious and lay people gathered to oppose the death penalty and the spate of extrajudicial killings.

Priests, bishops and lay people mostly clad in white shirts walked around the vicinity of the Quirino Grandstand, praying the Rosary as they wielded their placards and tarpaulins.

Manila auxiliary bishop Broderick Pabillo was one of several prelates who attended the Walk for Life prayer rally, which was organized by the Sangguniang Laiko ng Pilipinas.

“I am very surprised and pleased with the outcome… I hope that the voices of the people against the killings will reach the government,” said the chairperson of the Catholic Bishops Conference of the Philippines’ Episcopal Commission on the Laity.

Pabillo called the prayer rally as the Church’s “show of force” on the controversial issues of the death penalty and extra-judicial killings.

Asked if President Duterte would listen to the voice of 10,000 Catholics, the prelate said: “If he is a logical person, he will listen.”

CBCP president and Lingayen-Dagupan archbishop Socrates Villegas, for his part, said the crowd’s numbers was not that important as what was more material was the quality and not the quantity of the prayers.

“We are confident that God will heed our prayers today in our Walk for Life,” Villegas said when asked if the President would listen to their calls.

Aside from the death penalty and the extra-judicial killings, the three-hour activity also highlighted the Church’s stand against abortion, corruption and illegal drugs.

Religious and lay people walked around the vicinity of the Quirino Grandstand before dawn for almost an hour, reciting the Rosary with each step.

Caloocan bishop Pablo David said the Walk for Life is also in support of the peace initiatives between the government and the communist rebels, which has been called off.